A maze is very different from The Labyrinth.  A Labyrinth is a map of the Egg, a maze is a map of your Memory.

Below I have reproduced the diagram from the memory section to show you.  The Maze principally represents the accumulated Database of facts [which as we saw generally are not facts].  Looks like a maze doesn’t it?  The more badly organised your Memory is the worse the maze – you run a real risk of being lost in your own Memory on a permanent basis.  So a truly difficult maze is a pointer towards the need for a bit of reorganisation on your part.

Within this maze we also have some quite important categories of information stored.

In effect, if you see this maze in a spiritual experience, you are seeing  a symbolic representation of your life’s plan – the road to your Destiny. 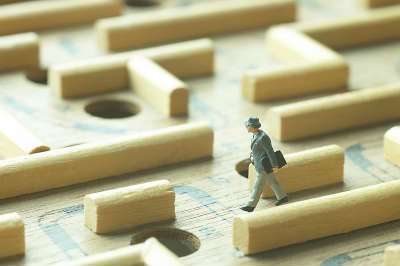 If you traverse this in a dream or vision or similar experience then it may help you see better paths to follow.  You might be able to see that some paths are a dead end, you may come across real problems [ogres!] and have to turn back [unless you face them], you may go a long way along one route only to find you have to turn back because that approach got you nowhere – it was not leading us to the goal – our destiny.  The more difficult the job you have been given, the more complex is the plan - it looks like a maze!

At no stage in life’s journey are you able to ‘see over the walls’ to understand what the goal is, nor how to get there.  This is the difficulty of life – that the routes, the overall plan and the goal may be already defined – but the actual path taken you have to work out for yourself.

In many visions manufactured for us by the composer we are shown parts of our life’s plan – the routes we have taken or are to take.  We may be shown the branches, the other people or helpers that we might meet or who have helped us.  This is a constructed vision.  We may see tunnels and doors, guardians and helpers, portals and paths – all symbolic and all composed for us to give us a perspective on where we are.  Many dreams take on this shape.

At the centre of every maze is the ‘prize’ – the Treasure.  Our destiny is to obtain this prize whatever it happens to be.

The television game show of the Crystal maze cleverly combined the symbolism of the egg and its many layers, with that of a maze and problem solving.  The winner received ‘crystals’ symbolic of achievement – the diamond and the treasure.