I have added this extra observation to provide an interesting comparison to Magritte’s paintings.

Extract from So We Enter the Aethyr - Salvia divinorum (10x extract) - by Ashton R.  Source EROWID
I searched elsewhere, and entered into loops of tunnels. Each tunnel had an end to it - like a door or a light. Again, I realized that if my motion was not guided, I would only continue looping through the tunnels - never reaching a light or going through a door. So, when I found myself in a tunnel and seeing the light/door, I focused all my energy on reaching the door. Opening it if it was closed, or peeking through it if it was open. The amount of focus required proved to be significant - a lot of concentration was needed.

Sometime in all this, wondering where I was, it suddenly registered that I was in the 'flow of information' (thinking about the lies in the voices sparked the realization) - and after that, I resolved to do some magical work; working with it instead of trying to 'let go'. Traversing the tunnels, I opened as many doors as I could to the light behind them. I passed through many images, but I was not able (or willing) to peek through every door I opened (either being pulled away to somewhere else or just unable to remain long enough to look). Some were more difficult to get to than others. I don't remember everything I saw - but a couple things stick out.

One of them was being in what I would call a hallway - but was actually more like a defined road coloured white - with the ground not being ground, but a falling away of ground in blue. The picture had a very technological feel to it. There were feature-less people walking along the road, who looked as though they were made of white clay or coated in white plastic. Some were taller, some were shorter - but they were featureless and clothing deprived, not male or female, and hairless. They were human. They were all passing under this door frame that was around the middle of the road. Nothing happened to them - the door frame simply happened to be there. I was like a ghost, passing over them and through them. This did not seem very important/did not strike me - but I do remember it. 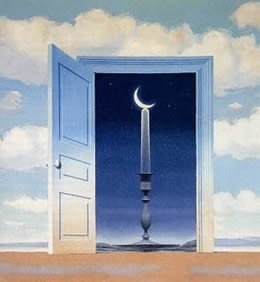 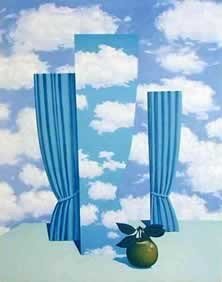