Egyptian Book of the Dead - Spell 109 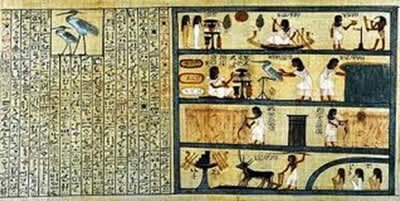 Although agricultural activities still went on in this spiritual place of peace, the Egyptians delegated the work in death to ‘shabtis’ represented in their tombs by small figurines, that were supposed to take away all the normal hard work and leave the person in peace to do nothing but enjoy the place.

I know the northern gate of the sky; its south is in the Lake of Waterfowl, its north is in the Waters of Geese, the place in which Re navigates by wind or by rowing.  I am the whip-master in the Ship of the God, I am one who rows and does not tire in the bark of Re.

I know the souls of the easterners; they are Horakhty, the sun calf, and the Morning Star.