The Book of the Dead is the modern name given to the ancient funerary texts placed in the coffins or burial chambers of the deceased in ancient Egypt.  They were used from the beginning of the New Kingdom (around 1550 BC) to around 50 BC. 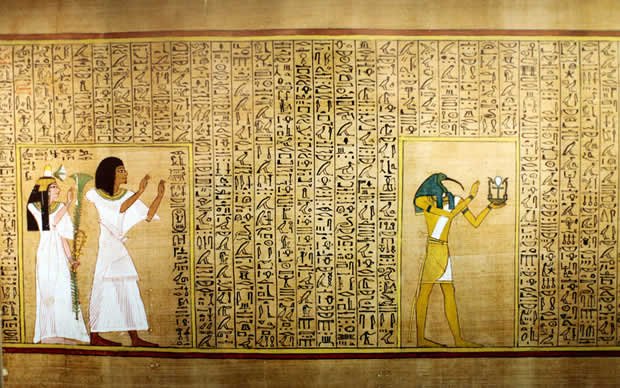 Although they now have this association with the dead, the correct Egyptian name for the text, transliterated rw nw prt m hrw is translated as "Book of Coming Forth by Day". Another translation would be "Book of emerging forth into the Light". This is significant as in my view they are both texts that could be ‘used’ by the dead, but also shamanic texts used in order to help navigate during spiritual experience.  Given that shamans could be psychopomps, they may have also served in this role.  I am not alone in believing this...

Paul Brunton - A Search in Ancient Egypt
When the Egyptian Book of the Dead speaks of the deceased, it really refers to the living dead - men entranced as profoundly as in death, with bodies still and motionless, with souls loosed into another world.  It refers to Initiation.  In some mysterious manner this other world interpenetrates our own and these spirits may be very close to us mortals.  Nothing is lost in nature, the scientists tell us, and when a man disappears from this world, leaving a senseless inert body behind, it may well be that he reappears in the aether, invisible to us, but visible to etheric beings.

So he had gone out of body. 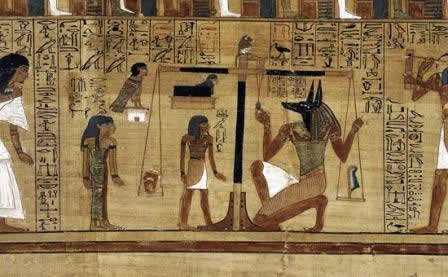 There was no single or canonical Book of the Dead. The surviving papyri contain a varying selection of texts and vary considerably in their illustration. Some people seem to have commissioned their own copies of the Book of the Dead, perhaps choosing the spells they thought most vital in their own progression. This rather makes the Book of the dead a sort of guide to the Spiritual path rather than a funerary text.

The text consists of a number of magic spells. Some of the spells come from the earlier Pyramid Texts, which were painted onto objects, and date to the 3rd millennium BC. Other spells were composed later in Egyptian history, dating to the Third Intermediate Period (11th to 7th centuries BC). A number of the spells which made up the Book continued to be inscribed on tomb walls and sarcophagi, as had been the spells from which they originated.

The New Kingdom saw a flowering in the use of these documents.  The famous Spell 125, the 'Weighing of the Heart', is first known from the reign of Hatshepsut and Tuthmose III, c.1475 BC. From this period onward the books were typically written on a papyrus scroll in hieroglyphics, and the text illustrated with vignettes.

During the 25th and 26th dynasties, the books were updated, revised and standardised. Spells were consistently ordered and numbered for the first time. This standardised version is known today as the 'Saite recension', after the Saite (26th) dynasty. In the Late period and Ptolemaic period, the Book of the Dead remained based on the Saite recension, though increasingly abbreviated towards the end of the Ptolemaic period. New texts appeared, including the  Book of Breathing and Book of Traversing Eternity. All of which have the feel of shamanic instruction guides.  The last use of the Book of the Dead was in the 1st century BC.

At present, some 192 spells are known, though no single manuscript contains them all. They served a range of purposes. Some provide ‘mystical knowledge’, many of them describe the spiritual landscape – with all the features I have described – lakes, mountains, hills, stairs and ladders, gardens, streams and rivers and so on, - the sort of symbolic landscapes seen in trances and visions.  Some help with the encounters with guardians,  some describe portals of all sorts from doors to tunnels.  There are numerous boats.  Some have sails, some don’t but most seem to have oars!  There are descriptions of the Levels and layers.  There is also a clear description of the Intelligences.  Some describe the ‘Great Ennead’, a group of gods, in effect the Intelligence hierarchy.

The shaman was required to pass a series of gates, caverns [caves] and mounds [hills]  guarded by supernatural creatures [guardians]. These creatures had to be pacified by reciting the appropriate spells included in the Book of the Dead; once pacified they posed no further threat, and could even extend their protection to the person.

If we take an example:

In the Two 'gate spells', the top register shows Ani and his wife facing the 'seven gates of the House [Palace]  of Osiris'. Below, they encounter ten of the 21 'mysterious portals of the House of Osiris in the Field of Reeds'. All are guarded by unpleasant protectors [guardians].

So in the Books of the Dead, we are dealing with a sort of map of the spiritual word as perceived by the shamans of ancient Egypt.  It should be noted that maps of this kind are not at all uncommon and were produced from Tibet, to North America, in Buddhist countries,  Siberia and mainland Europe.

The Egyptians also believed that knowing the name of something gave power over it; thus, the Book of the Dead equips its owner with the mystical names of many of the entities he would encounter.

The name of the person, which constituted their individuality [Personality] and was required for their continued existence, was written in many places throughout the Book, and spell 25 ensured the person would remember their own name. The ba in Egyptian thought was equivalent to the Higher spirit and it was this aspect that did the travelling.  Given that out of body experiences result in the Higher spirit going off and leaving the body and its personality behind, the spells look progressively more like a guide to out of body experiences when one studies them.  Out of body is dangerous as one can indeed forget how to get back.

If you managed to master out of body travel one was regarded as an akh. An akh was a blessed spirit with magical powers who would dwell among the gods.

Then there are the tests one has to go through to progress.  Again one can consider this something that happens after death – the path of reincarnation [see the Hours and the four seasons] or something that happens during life depending on the path you have taken.  The two spells dealing with the figurative  ‘Weighing of the Heart’ ritual come within this category.

What is perhaps intriguing about the Weighing of the heart ritual is that it incorporates a moral code.  This makes it a feature of a spiritual path, not an after death ceremony.  It was a symbolic way of showing what the moral judgements were on the spiritual path.  The shaman was led by Anubis into the presence of Osiris. There, the person swore that he had not committed any sin from a list of 42 sins,  reciting a text known as the "Negative Confession". Then the person's heart was ‘weighed’ on a pair of scales, against the goddess Maat, who embodied truth and justice. Maat was often represented by an ostrich feather, the hieroglyphic sign for her name.  These ideas, incidentally, have been incorporated into the spiritual path described in The Chemical wedding of Christian Rosenkreuntz.

I have used the books and translation  by Raymond O. Faulkner (1972).