Egyptian Book of the Dead - Spell 149

In spell 149 of the Egyptian Book of the Dead,   there is an accompanying painting - British Museum 10477/28, 29 and 30.  The three details show the fourteen mounds of the Field of Rushes represented pictorially and named.  Eleven of them are termed 'green', the remainder 'yellow'.  The sixth contains an eel like fish, the ninth a crocodile nuzzling a jar shaped area, the tenth a cobra over a man brandishing knives and the eleventh a jackal headed demon with knives inside a stepped area. 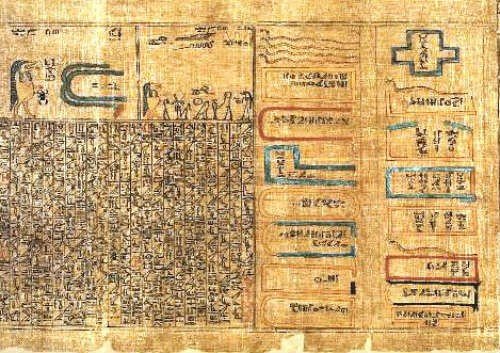 The third mound; green.
The Mound of Spirits

N says:  As for the Mound of spirits over which none travel,
it contains spirits,
and its flame is efficient for burning.
As for the Mound of Spirits whose faces are downcast,
cleanse your mounds,
being what it was commanded that you should do for me by Osiris,
Lord of Eternity,
For I am a Great One.

The Red Crown which is between the horns of the Sunshine-god
makes the whole world to live with the flame of its mouth,
and Re is saved from Apep.

N says :  As for the Chief of the mysterious mound,
as for the very high mountain which is in the realm of the dead,
on which the sky rests,
it is 300 rods long by 150 rods wide;
a snake is on it called 'Caster of Knives'

The sixth mound; green.
N says:  As for this cavern sacred to the gods, secret from spirits and inaccessible to the dead,
the god who is in it is called 'Feller of the Adjufish'.
Hail to you, you cavern!
I have come to see the  gods who are in you.
Clear your vision, doff your head cloths when meeting me as at the likeness of the greatest among you
I have come to prepare your flat cakes, and the Feller of the adju-fish shall not have power over me,
the slayers shall not pursue me,
the adversaries shall not pursue me,
and I shall live on the offerings which are with you