The crocodile is a symbol of the ‘reptilean brain’ – the deep subconscious.

At this level of our subconscious, the instincts are paramount and all the mammalian emotions absent.  Only the basic functions are present – procreation, food and survival.  To a large extent one has sunk to the level of the Will and autonomic systems.

The crocodile, however, is an animal of raw power and strength.  It is merciless with prey and extremely agile, despite its size.  It is to be feared.  It can kill.

Thus if one sinks down to this level of the subconscious we meet what originally drove us all, whatever species we were – survival and survival by any means available.

In ancient Egypt, the ‘god’ that represented this raw power was Sobek.   Egyptians who worked or travelled on the Nile, had every reason to fear the crocodile but fear also often generates respect.

The god Sobek, was depicted as either just a crocodile,  or a man with the head of a crocodile.  In some Egyptian creation myths, it was Sobek who first came out of the waters of chaos to create the world. This matches the concept of the deep subconscious as the first brain but there is a bit more to the myth. Further symbolism can be found in the crocodile skin that resembles the Matrix and its open jaws that take on the symbolism of teeth. Thus its power is symbolic of creation and destruction and it is sometime linked with the Creator for this reason. 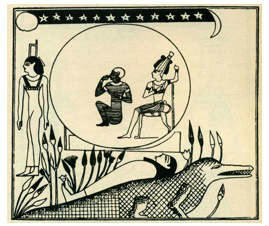 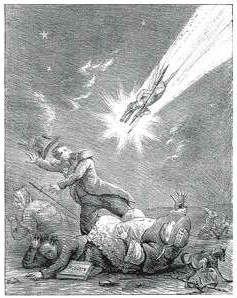 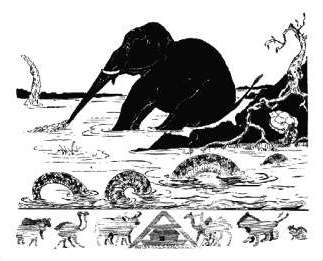 He is pulling very hard, and so is the Crocodile: but the Bi-Coloured-Python-Rock-Snake is hurrying through the water to help the Elephant's Child. All that black stuff is the banks of the great grey-green greasy Limpopo River (but I am not allowed to paint these pictures), and the bottly-tree with the twisty roots and the eight leaves is one of the fever-trees that grow there.

Underneath the truly picture are shadows of African animals walking into an African ark. There are two lions, two ostriches, two oxen, two camels, two sheep, and two other things that look like rats, but I think they are rock-rabbits. They don't mean anything. I put them in because I thought they looked pretty. They would look very fine if I were allowed to paint them.