Egyptian Book of the Dead - Spell 030

Thus says Thoth, judge of truth, to the Great Ennead which is in the presence of Osiris; Hear this word of  very truth.  I have judged the heart of the deceased and his soul stands as a witness for him.  His deeds are righteous in the great balance, and no sin has been found in him.  He did not diminish the offerings in the temples, he did not destroy what had been made, he did not go about with deceitful speech while he was on earth.

Thus says the Great Ennead to Thoth who is in Hermopolis; This utterance of yours is true.  The vindicated Osiris N is straightforward, he has no sin, there is no accusation against him before us, Ammit shall not be permitted to have power over him.  Let there be given to him the offerings which are issued in the presence of Osiris, and may a grant of land be established in the Field of Offerings  as for the Followers of Horus

Thus says Horus son of Isis; I have come to you, O Wennefer, and I bring N to you.  His heart is true, having gone forth from the balance and he has not sinned against any god or goddess. 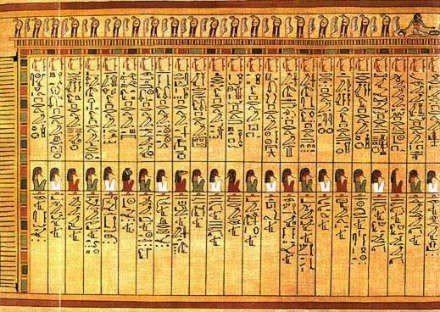