Borobudur is a ninth-century Mahayana Buddhist monument in Magelang, Central Java, Indonesia. The monument comprises six square platforms topped by three circular platforms, and is decorated with 2,672 relief panels and 504 Buddha statues.   A main dome, located at the center of the top platform, is surrounded by 72 Buddha statues seated inside perforated stupa.

Borobudur is located in an elevated area between two twin volcanoes, Sundoro-Sumbing and Merbabu-Merapi, and two rivers, the Progo and the Elo. According to local myth, the area known as Kedu Plain is a Javanese 'sacred' place.

Unlike other temples, which were built on a flat surface, Borobudur was built on a bedrock hill, 265 m (869 ft) above sea level and 15 m (49 ft) above the floor of the dried-out paleolake. Borobudur is thought to have been built on the lake shore or even on an island in the lake.  A study of stratigraphy, sediment and pollen samples conducted in 2000 supports the existence of a paleolake environment near Borobudur.

The temple was restored between 1975 and 1982 by the Indonesian government and UNESCO, following which the monument was listed as a UNESCO World Heritage Site. 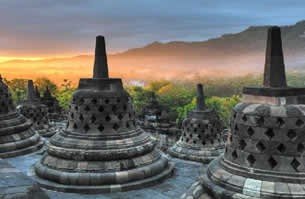 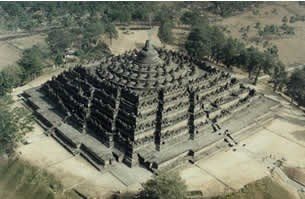 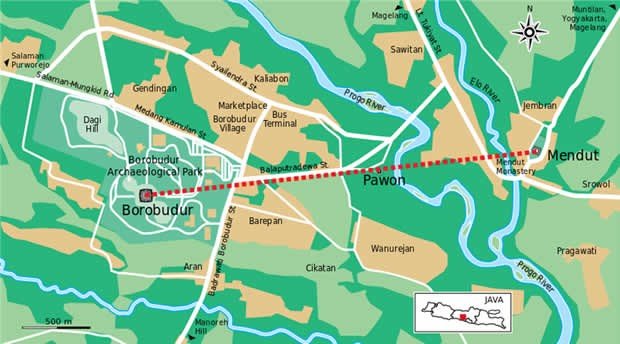 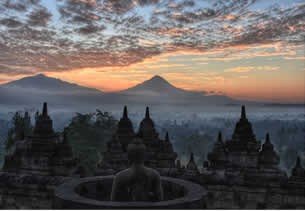 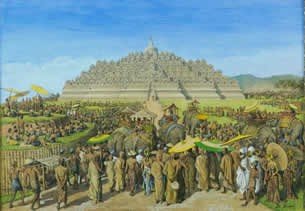