The Great Egyptian labyrinth was part of the overall site that included the Great Pyramid at Giza, the causeway from the site to Heliopolis and Heliopolis itself.  Heliopolis was a great place of learning and its principle purpose was to prepare candidates for the Mysteries.

The Great pyramid was used as the final place of initiation, the place of rebirth, however, before the initiate could enter the Pyramid, he had to pass and understand the symbolism of the sphinx and also get through the labyrinth which was intended to be very frightening and not easy - an accurate representation of the layout and nature of the Egg in all its complexity.

The first recorded labyrinth was probably the Egyptian Labyrinth, although there are mentions of a labyrinth [the prototype for all others] in Atlantis. Herodotus, a Greek traveler and writer, visited the Egyptian Labyrinth in the 5th century, BC. The building was then located just above Lake Moeris  - in effect the Egyptians had incorporated lake and water symbolism into the design - and opposite the city of the crocodiles (Crocodilopolis). Herodotus was very impressed by it, stating, "I found it greater than words could tell … all the works and buildings of the Greeks put together would certainly be inferior to this labyrinth as regards labour and expense." Herodotus added that even the pyramids were surpassed by the Egyptian Labyrinth.

Herodotus, in Book II of his Histories, describing the "labyrinth" :

It has twelve covered courts - six in a row facing north, six south - the gates of the one range exactly fronting the gates of the other. Inside, the building is of two stories and contains three thousand rooms, of which half are underground, and the other half directly above them. I was taken through the rooms in the upper story, so what I shall say of them is from my own observation, but the underground ones I can speak of only from report, because the Egyptians in charge refused to let me see them, as they contain the tombs of the kings who built the labyrinth, and also the tombs of the sacred crocodiles. The upper rooms, on the contrary, I did actually see, and it is hard to believe that they are the work of men; the baffling and intricate passages from room to room and from court to court were an endless wonder to me, as we passed from a courtyard into rooms, from rooms into galleries, from galleries into more rooms and thence into yet more courtyards. The roof of every chamber, courtyard, and gallery is, like the walls, of stone. The walls are covered with carved figures, and each court is exquisitely built of white marble and surrounded by a colonnade.

The ancient writer Pliny in his book "Natural History," written in the first century AD, also talks a little about this labyrinth.

He noted that the labyrinth contained palaces and temples to all the gods of Egypt as well as "banquet halls reached by steep ascents, flights of ninety steps leading down from the porticoes, porphyritic columns, figures of gods and hideous monsters, and statues of kings." Pliny goes on to say, "Some of the palaces are so made that the opening of a door makes a terrifying sound as of thunder. Most of the buildings are in total darkness." 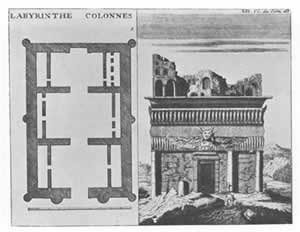 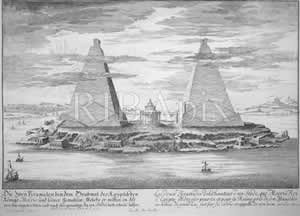