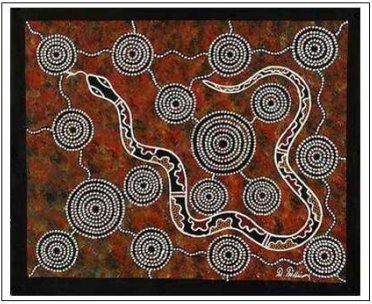 The Ancients sang their way all over the world.  They sang the rivers and ranges, salt pans and sand dunes.  They hunted, ate, made love, danced, killed, wherever their tracks led they left a trail of music.

They wrapped the whole world in a web of song; at last when the earth was sung, they felt tired.  Again in their limbs they felt the frozen immobility of Ages.  Some sank into the ground where they stood.  Some crawled into caves.  Some crept away to their Eternal Homes, to the ancestral waterholes that bore them.

All of them went ‘back in’.