The symbolism of Big foot is complementary to that of lameness.

In the same way that lameness in the right leg showed the hobbling effect of the Conscious mind and the Intellect, Big Foot has an extremely large left foot.  As the left side of the body connects to the right brain and the right brain is the seat of imagination, creativity, the emotions etc, the symbolism is demonstrating that the person has a figuratively ‘enlarged’ feminine side [see Brain split left brain and right brain functions]

Big foot is always free of shoes. Thus it represents soul in permanent communication with Higher spirit. Anyone called Big Foot would have been a very very powerful shamanic figure.

The following picture comes from the Nuremberg chronicles [1493], and because no one appears to understand the symbolism, they nicknamed him ‘umbrella foot’.  But he is a naked man – nakedness has its own symbolism and he has a very large left foot and apparently no right foot. 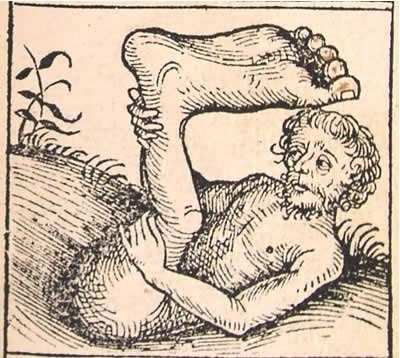