Where one is inside what appears to be a snake, one is in a tunnel, snakes from the outside have a different symbolism.

Tunnels and our bodies

Our spiritual body – energy body – has a large number of chakras,  which are the receivers and also it appears the emitters of energy.  The chakras seen in many hallucinations [hallucinations because the image is superimposed on the physical body]  are whirlpool like spinning whirling energy.

When we go out of body it is usually through these chakras and as a consequence we appear to be going through a tunnel or whirlpool or other similarly moving energy vortex.  As you can see from the diagram above we can go ‘down’ figuratively speaking and ‘up’.  The Ida and Pingala energy channels that one experiences in a kundalini experience all link up with these energy centres, as such we have spiritually a sort of communications network of energy around which we can traverse and eventually go ‘out of body’.

In effect, when we see any form of tunnel having not gone totally out of the body we are seeing and traversing our own spiritual communications network!  Thus visions come within this classification.

If this tunnel is also whirring round and perhaps making a noise too, maybe a humming noise or just twirling round, we are at an exit point  - a so called ‘gate’ - and in the chakras close to having an out of body experience.

Given that the spiritual and the physical are closely mirrored, you could be travelling along nerves, blood vessels or any other of the physical routes that exist in your body.  Analogously the nerves, blood vessels and so on are the physical hardware network, but over this network software messages and information get transmitted and sometimes in visions or out of body experiences we become like a little packet riding  a killer T cell or a message galloping along on a  white blood cell charger [sorry getting carried away here].

In fact, it is possible we may derive the expression ‘light at the end of the tunnel’, from shamanic and visionary experience rather than it being some more obvious allegory

Beyond the body - Tunnels as portals

Beyond our own bodies other tunnels also exist – other communication channels.  Thus once out of body we may well encounter the tunnels of other things.

Using the analogy, if we imagine ourself as a computer, we can travel within our own computer network [circuitry], but having left our computer circuitry via the so called gates and doors, we can travel over the spiritual Internet!  If we do, we may again see tunnels because we are seeing the communications network of something else.

Travel to other networks can also occur via a Bridge. 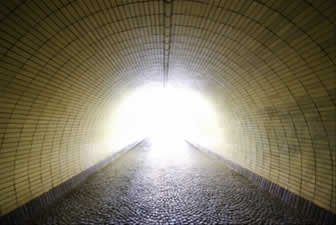 The tunnel for birth and death

The tunnel is a frequently reccurring image in near death experiences.  People perceive that they are going down a tunnel or corridor at the end of which is a bright light. In effect near death and out of body experiences often share a common starting point.

In a number of belief systems, the existence of two tunnels is posited for birth and death.

In this case the two tunnels for death are going to two different places on death – one is the route of Reincarnation and the other the route of … well who knows, nobody has ever come back to tell us!! 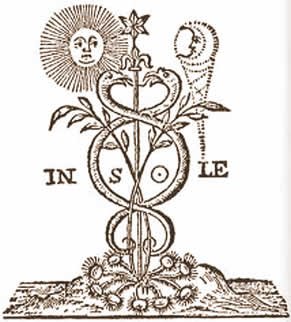 A Dictionary of Symbols – J E Cirlot
According to Hindu belief, the individual upon freeing himself from the shackles of the manifest world, follows a route which is the inverse of that path which he took when entering into it.
Within this system of thought there are two possible paths which he may take; either that of the liberated – de-va-yana or the 'way of the gods – or else that followed by those who still have further states of individuation to pass through – pitri-yana or 'the way of the ancestors'.
As the Bhagavad-Gita observes:
'At this juncture, those who tend towards union, without actually having achieved it, leave manifest existence behind them, some to return to it later, others never to return....
Fire, light, day, the crescent moon, the half year of the sun's ascendence and its northerly course – these are the luminous signs which lead to Brahma.
Smoke, night, the waning moon, the half year when the sun descends towards the south – such are the signs that lead to the lunar light and immediately to the return to states of manifestation 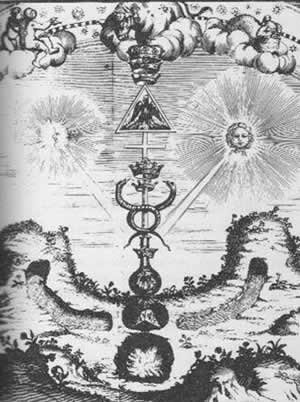 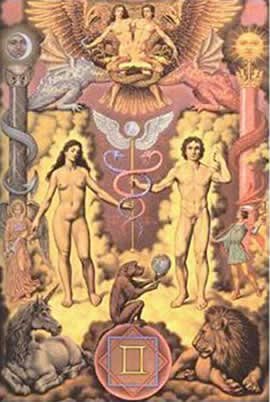 From this belief we get the imagery of the horns.  This is where the myth of the Vikings’ horned helmet came from, whether such helmets existed in reality we will never know, but the imagery is based on the idea of a connection with the spiritual world along with the two routes.

It is also why the imagery is used extensively in Hindu and other cultures along with the use of bulls and cows – because they have horns and produce milk - spiritual input.

The same horns are incorporated into the symbolism of Aries and Taurus, the signs of the Zodiac – those which have a cyclical connection to birth and death or new beginnings, creation and destruction.

Ritually a horned helmet probably signified someone able to control life and death – a sort of immortal or god.

Anyone who can do this was probably regarded as a really scary person once religions got a strong hold and these ‘gods’ were then demoted – from which we get the image of the devil.  The red colour is key because it ties in with the Fire level and layer. 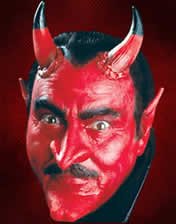