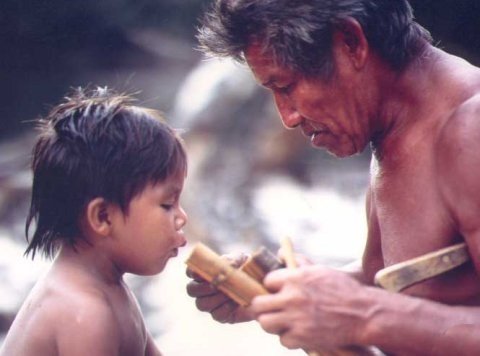 The Creator is designated as the Sun [and Moon], but as the divinity and ultimate reality the name is go'a-mee. This term is translated by my informant as divinity, supreme force, and he adds that this is the way it is understood by people who take the Creation and its Creator as given facts without worrying about the nature of the divinity; besides, he says that in this very name lies the key that explains the essence of the demiurge and of the process of Creation…………

The word go'a-mee is derived from go'a/bone and the suffix mee that indicates a state of potential, of power to produce something………..

The Desana compare the divine bone with a tube, and in this form it is designated as ve'e go'a. The word ve'e means "tubular cane," like those used to make thin flutes or an arrow, and this tube is said to connect the divine sphere "on high" with the divine sphere "below," the latter being imagined as a primogenic uterus located under our world. This uterus is Ahpikondia, and the tubular bone that is the divinity penetrates the Universe vertically in the form of an immense phallus.

"The bone-god is a penis," says our informant, and adds "This tube, this bone makes contact between man and Ahpikondia: through it arises inspiration. It is the principal channel that interconnects. The bone-god is the penis, the fundamental part of the Creation."

The process of fertilisation is effected through the bone-tube that unites the cosmic levels in permanent copulation and, the informant adds, "Between the visible world and the invisible there is sexual contact.