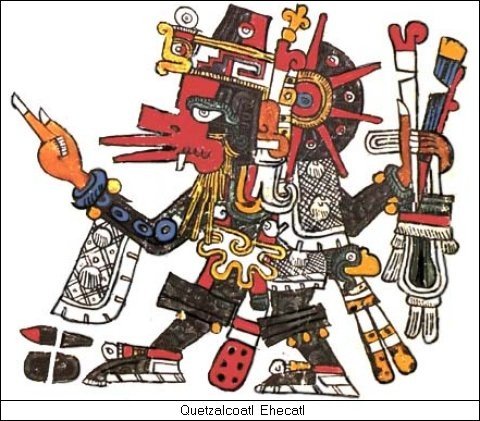 Ehecatl (Spanish: Ehécatl, Nahuatl: ehēcatl; Classical Nahuatl: Ecatl [ˈekatɬ]) is a pre-Columbian deity associated with the wind, who features in Aztec mythology and the mythologies of other cultures from the central Mexico region of Mesoamerica. He is most usually interpreted as the aspect of the Feathered Serpent deity (Quetzalcoatl in Aztec and other Nahua cultures) as a god of wind, and is therefore also known as Ehecatl-Quetzalcoatl. Ehecatl also figures prominently as one of the creator gods and culture heroes in the mythical creation accounts documented for pre-Columbian central Mexican cultures.

Since the wind blows in all directions, Ehecatl was associated with all the cardinal directions. His temple was built as a cylinder ........... and was sometimes portrayed with two protruding masks through which the wind blew.

As the fourth sun was destroyed in the Aztec creation myth (due to the gods not being satisfied with the men they had created) the gods gathered in Teotihuacan. There Nanahuatzin and Tecciztecatl jumped into a sacrificial fire and became the sun and the moon. They remained immobile until Ehecatl blew hard on them. At first only the sun moved, but once the sun started moving the moon moved also.