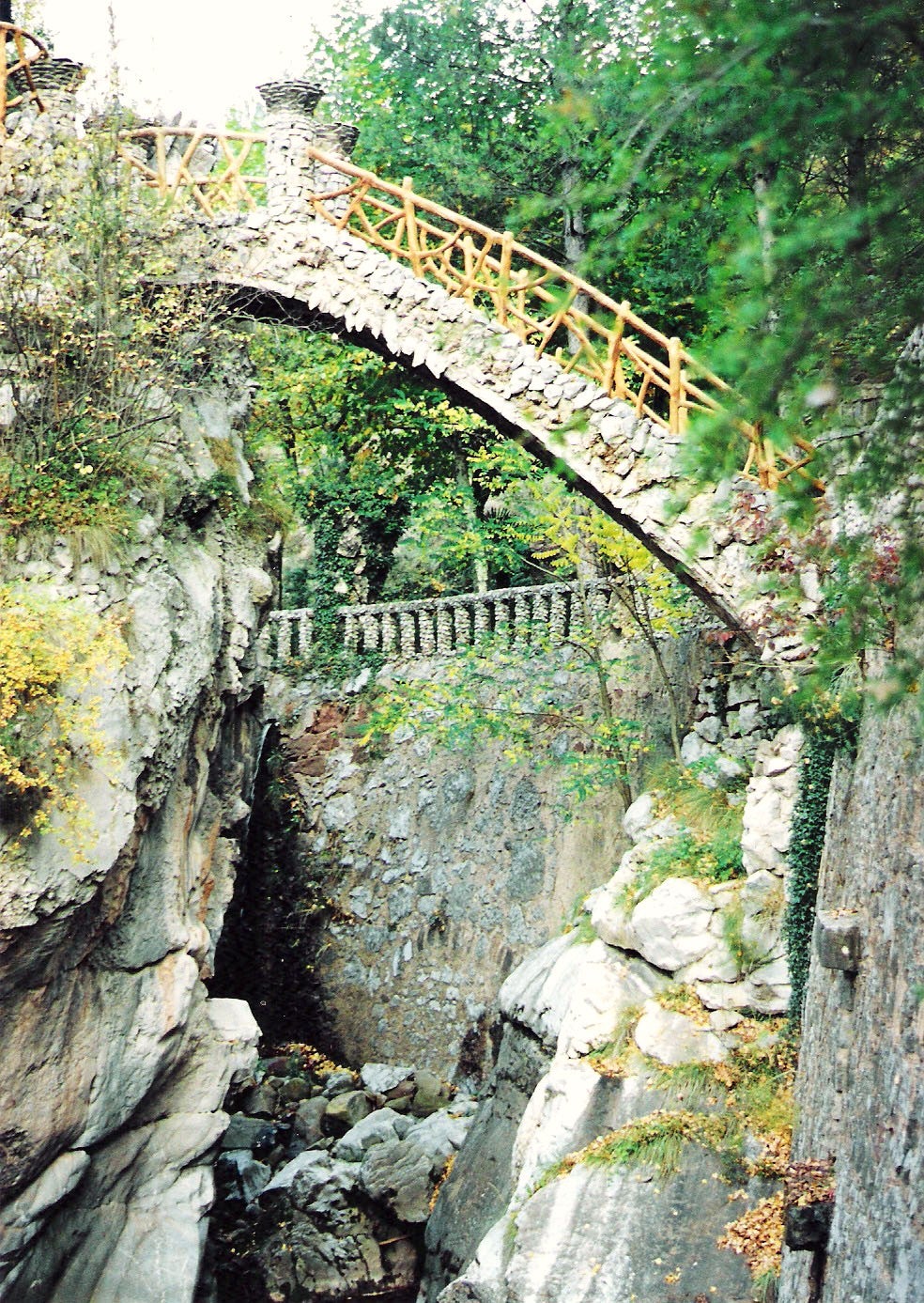 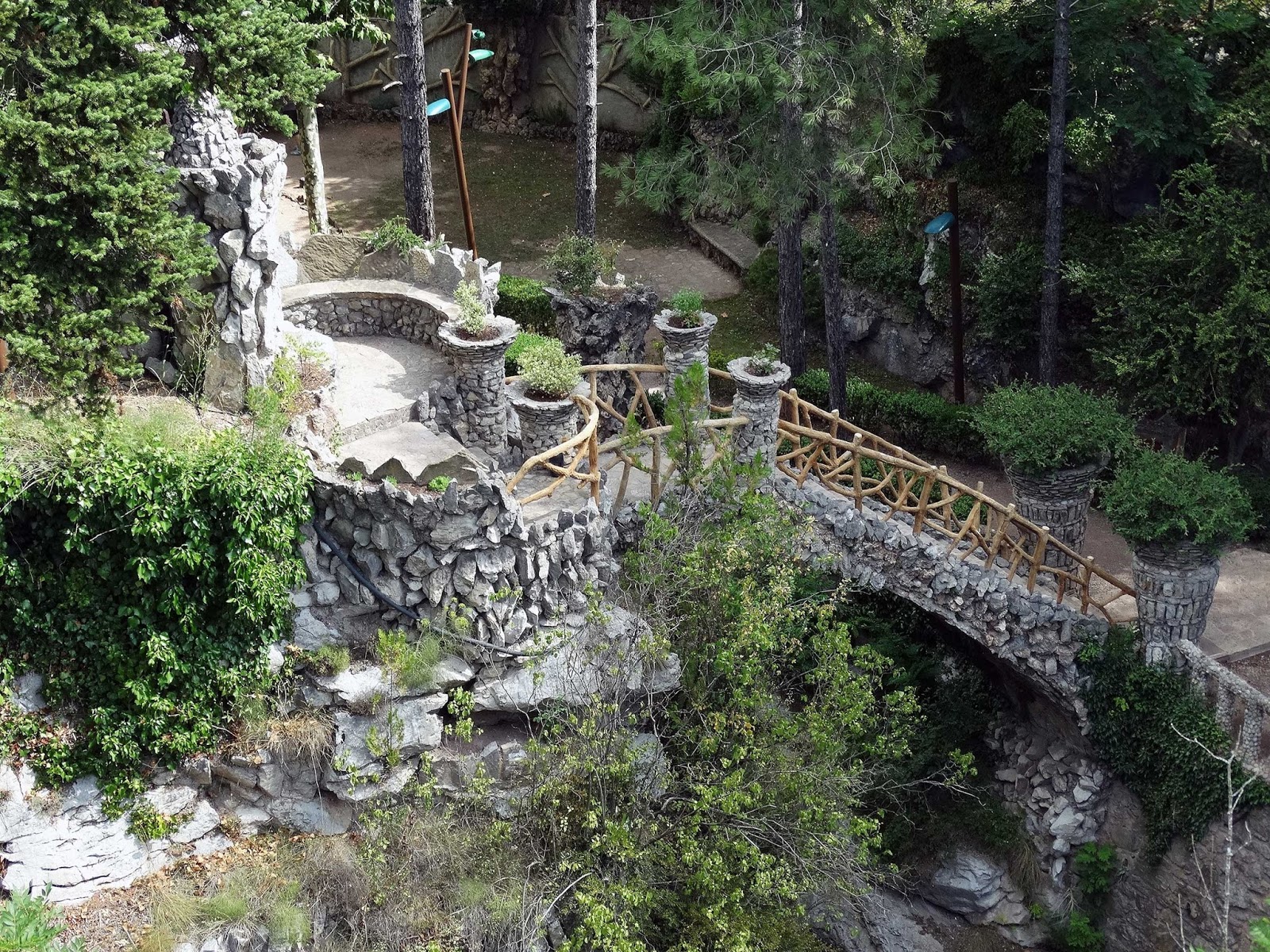 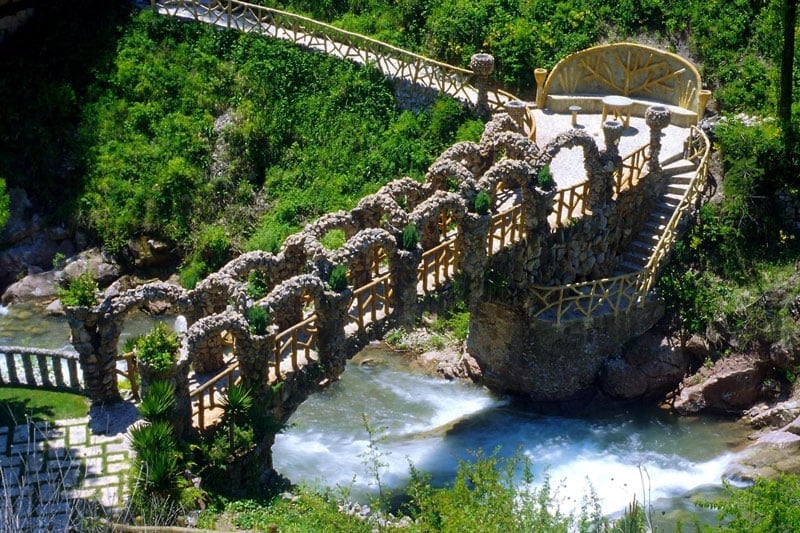 It is not widely known, that not only did Gaudi design buildings, their interiors and furniture, but he also did landscape garden design.  The Parc Guell was not originally a landscape garden project, but a model town with landscaped grounds, whereas the Artigas Gardens (Catalan: Els Jardins de Can Artigas) was intended to be gardens from the start.

In 1905, Gaudí travelled to Lillet to build the chalet of Catllaràs, a mountain refuge for the engineers of the coal mine that supplied the Asland cement plant in the nearby municipality of Castellar de n'Hug. The cement plant was owned by Eusebi Güell, Gaudí's principal patron. 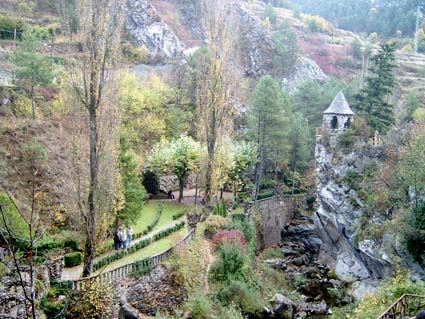 While in Lillet, Gaudí stayed in the house of the textile magnate, Joan Artigas i Alart, who had an estate named Font de la Magnèsia, on the Llobregat river. As thanks for the hospitality of Mr. Artigas, Gaudí designed these gardens for him.

Gaudí sent some of Park Güell's workers to Lillet, and the resulting stylistic and structural similarities between the two locations are obvious. As he did with Parc Güell, Gaudí designed the Artigas Gardens fully integrated with the surrounding natural environment. And at times it is somewhat difficult to tell which parts of the gardens are natural and which parts are designed.  He also built an artificial grotto.

The works were carried out between 1903 until 1910. But during this period, at the end of 1903, Joan Artigas i Alart, the initial developer of the project, sadly died. So he never got to see the final garden.  Thankfully, his son Joan Artigas i Casas followed on in his father’s business and supported the final construction of the garden. There is some indication that one or both of these men were either Masons or supported the Knights Templar organisation.  This has some relevance as we shall see shortly. 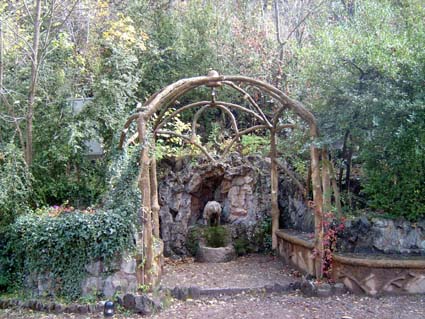 In the end, Gaudi’s workmen trained local workers to do the work and the local workers continued the construction following the sketches of Gaudí to the project end.  And it seems that “In all these actions the contribution of an extraordinary local bricklayer, Valentí Rovira, had been very important.”  Sadly, the original sketches were burned in the fire of the factory at the end of the civil war (1939).

By the end of 1971, the gardens were practically abandoned. Then, in 1971, an article appeared in the Barcelonan newspaper “El Correo Catálán” entitled “Gaudí in La Pobla de Lillet”.  This article described the Artigas Gardens, the chalet del Catllaràs and the chalet del Clot del Moro, suggesting that they were all works of Gaudí.  In 1982, a doctorate student of the Cátedra Gaudí -Josep Lluís Dalmau i Miralles- carried out a study and drew up the design of the gardens.

In 1992, they were restored under the supervision of the Reial Càtedra Gaudí. The current sculptures are the work of Ramon Millet i Domènech. The gardens are now owned by the municipality and are open to the public.

At first sight, one may look at the gardens and come to the conclusion that it is an interesting project but, in a way, it is not one of his best.  In a garden, Gaudi appears to have to compete with nature, and needless to say comes off worst.  By designing buildings that emulate the forms of nature he seems to better capture his regard for what nature has produced.  In effect, one might come to the conclusion that Gaudi’s work is best appreciated when it is placed in a position of contrast, not competition. 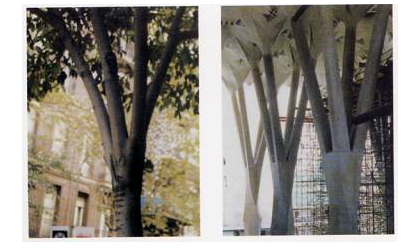 By designing within a natural environment Gaudi loses the ability to show off the genius of nature in new and exciting ways.  In a cathedral like Sagrada Familia, Gaudi can design columns that capture the beauty of trees, but give them a structural use that demonstrates how well designed trees are.  But in a garden what can he do?  A tree is then a tree!

Gaudi, as always, used natural materials in the construction, the place is naturally rocky and has very lush vegetation.  It is very restful, but somehow one misses the exuberance of the “trencadís” – the decorative mosaic carried out with broken ceramic pieces, which is used with so much imagination in the Park Güell.

There is more to this garden than meets the eye. 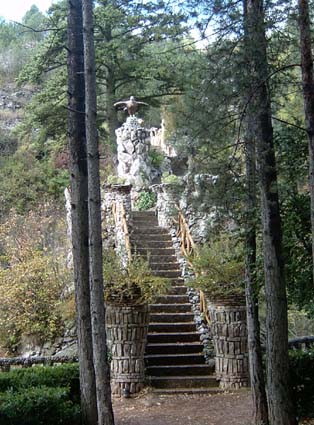 This garden is a symbol garden – an exciting adventure round paths to find mystic symbols, and they can be easily missed.  Suddenly things start to fit together.  If Gaudi and his patrons were all Masons, or belonged to the Knights Templar, they would have been extremely familiar with the idea of a sacred geography and the symbols it uses.

Gaudí first filled the gardens with symbols that are actually universal, but which would have been familiar to Catholics. This was intended to pique people’s interest, spike their curiosity.  He took, for example, the symbols from the four gospels and the Book of Revelations. Tetramorph images are found throughout the park: 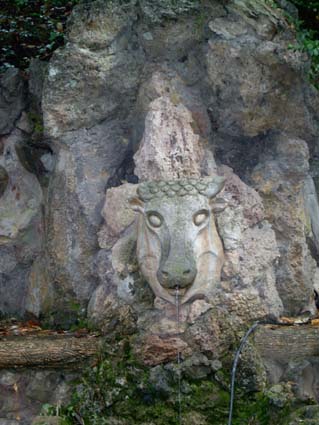 the angel of Saint Matthew at la Cascada;

·        the eagle of Saint John at the Coix arch bridge, which crosses the Llobregat river;

These four images are situated in the form of a cross. But there is more to find and Gaudí designed the garden with a path highlighting several places of interest: 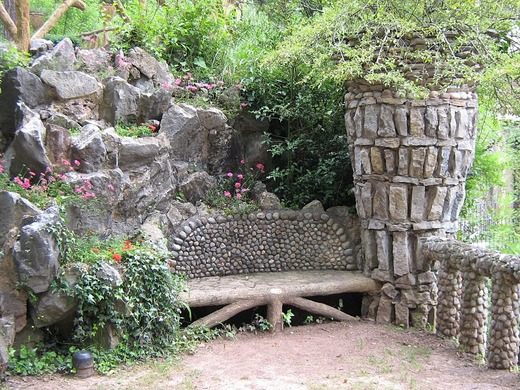 These structures are themselves symbols – the bridge, the fountain, the well, the gate, the fence, the wall, path or road, and the tunnel.  But there are far more symbols to be found.  There are stairs – ascension and descent.  Masculine and feminine, rivers and streams,  serpents, pyramids and cones.  Practically every mystic symbol is there.  Some of the symbols are even alchemical, which is very interesting in a devout Catholic.

I have yet to read a description that explains this point.  Maybe those who renovated this garden do not realise, in which case further tragedies may have been enacted as vital symbols were missed or discarded.  Without plans we have no idea what was where and what included. 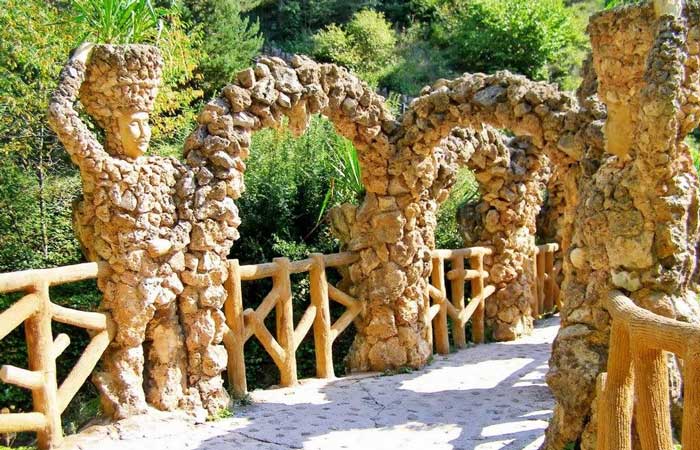 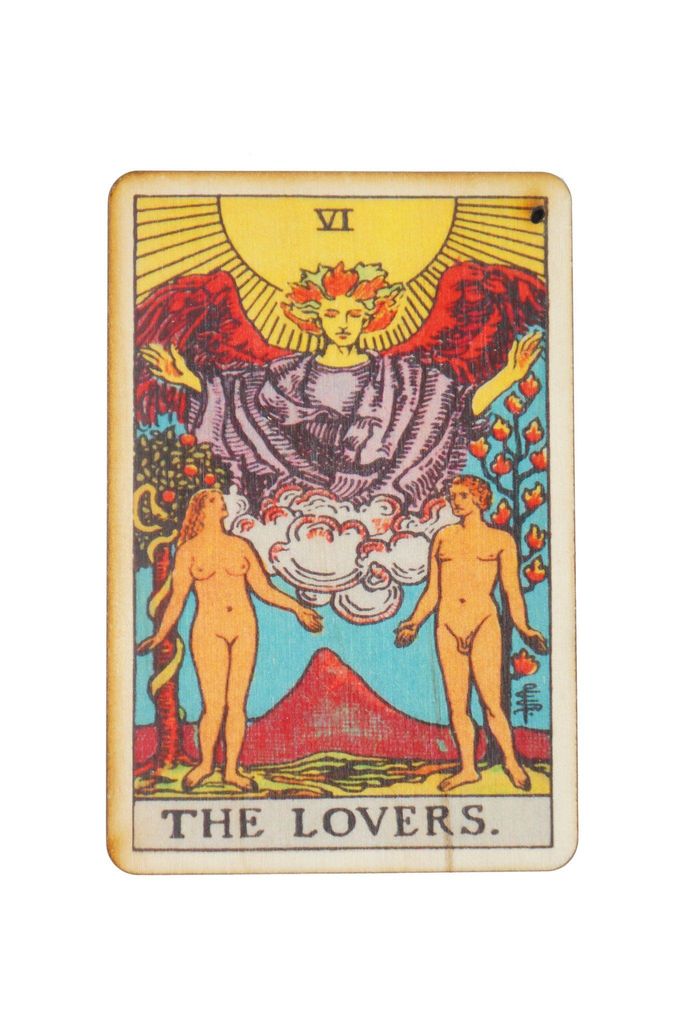 is perhaps the most important construction of the garden, this bridge has a curious structure of five rocky stone arches in cross and longitudinal sense. Five is the mystic number – Earth, Water, Air, Fire Aether – the Elements.  Gaudi was also taking us on a mock spiritual path showing us the levels and layers.  At the entrance – or is it the exit of the bridge are two figures of a man and a woman – these are the Lovers in the Tarot card – the symbolic joining of the masculine and feminine leading to ecstasy.

At the end of the visit one symbolically crosses the Arches bridge to arrive to the other side of the river – one has crossed to the other shore and there we find a palm tree – the symbol of ecstasy or spiritual enlightenment.

This garden is possibly the key to understanding Gaudi.  Not only was he a genius, but he was also a mystic, fully conversant with sacred geography and all its symbols.

cornucopia or the trumpets of judgement day? 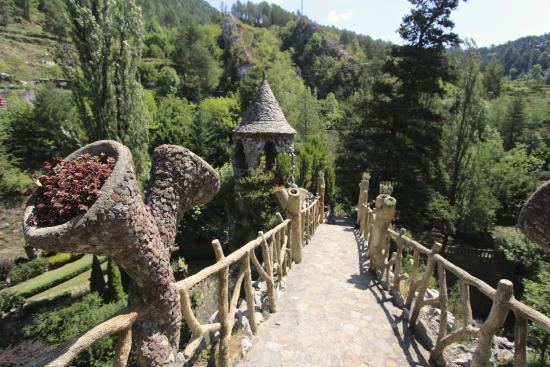