M A Czaplicka - The Anagyat of Siberian shamanism 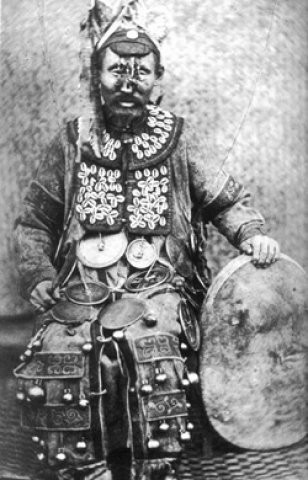 The Änägyat
is the indispensable attribute of every shaman.  It is also the name of the iron breast-circle, the sign of the shaman's dignity.  Even the weakest shamans possess änägyat
The .. ämägyat strikes us as being an …impersonal power.  Sieroszewski  explains that it is in most cases 'the spirit of a deceased shaman', or, in some rare cases, one of the secondary heavenly beings. But it seems that the term 'spirit' is used here quite vaguely; e. g., we read further on:
'The human body cannot contain the power of great gods, and so the spirit-protector remains always near the beloved man (outside of him) and willingly comes at his call; in difficult moments it helps him, defends him, and gives him advice.'
'The shaman sees and hears only through his ämägyat', says the shaman Tiuspiut

The yekyua
is 'sent from above, animal picture, bewitching spirit, devilish devourer' (Yekyua oïun abassyuah, simah abassyuah, üssüttan ongorudh).  It is carefully hidden from the people. 'My yekyua will not be found by any one; it lies hidden far away, there in. the rocky mountains of Edjigan.'  Once a year, when the snow melts and the earth is black, the yekyua arise from their hiding-places and begin to wander. They hold orgies of fights and noises, and the shamans with whom they are associated feel very ill. Especially harmful are the yekyua of female shamans.
The weakest and most cowardly are the yekyua of dogs; the most powerful are those of enormous bulls, stallions, elks, and black boars. 'Those shamans who have as their animal incarnation a wolf, bear, or dog, are the most unfortunate; these animals are insatiable; they are never satisfied, however much the shaman may provide for them.' The dog especially gives no peace to his two-footed fellow; he 'gnaws with his teeth the shaman's heart, tears into pieces his body'. Then the shaman feels sick and suffers pain. The crow is also a bad yekyua; the eagle and hairy bull are called 'devilish fighters and warriors' (abassy keiktah). This title is the most flattering one for a shaman. When a new shaman appears, the other shamans recognize him at once by the presence of a new yekyua, whom they have not seen before. Only wizards can see yekyua; to ordinary people they are invisible.
Troshchanski  says of the yekyua: 'Among the protectors of the shaman, the most important role is played by the yekyua (literally, "mother-animal"). It is said that the shamans incarnate their kut in certain animals, e.g. in stallions, wolves, dogs, and that these animals are thus the yekyua of shamans.
'If one of these animals kills another of its species, then the corresponding shaman will die.' Troshshanski thinks that the shaman incarnates his kut only during the time that he is actually shamanizing. … this 'black' animal-protector seems to be of a totemic and personal nature, to a certain extent 'of one blood and flesh' with his protégé

The kaliany
Besides the two so-called spirits mentioned above, there comes to the Yakut shaman, during shamanistic performances, still another kind of spirit, a rather mischievous one, which forces the shaman to talk and to imitate various, often indecent, gestures. These spirits are called kaliany, and their representatives may be a Russian devil, a devil's daughter with a devilish groom, who, being blind, is in the habit of groping about in the dark, &c