Quite a lot of concepts and symbols included here 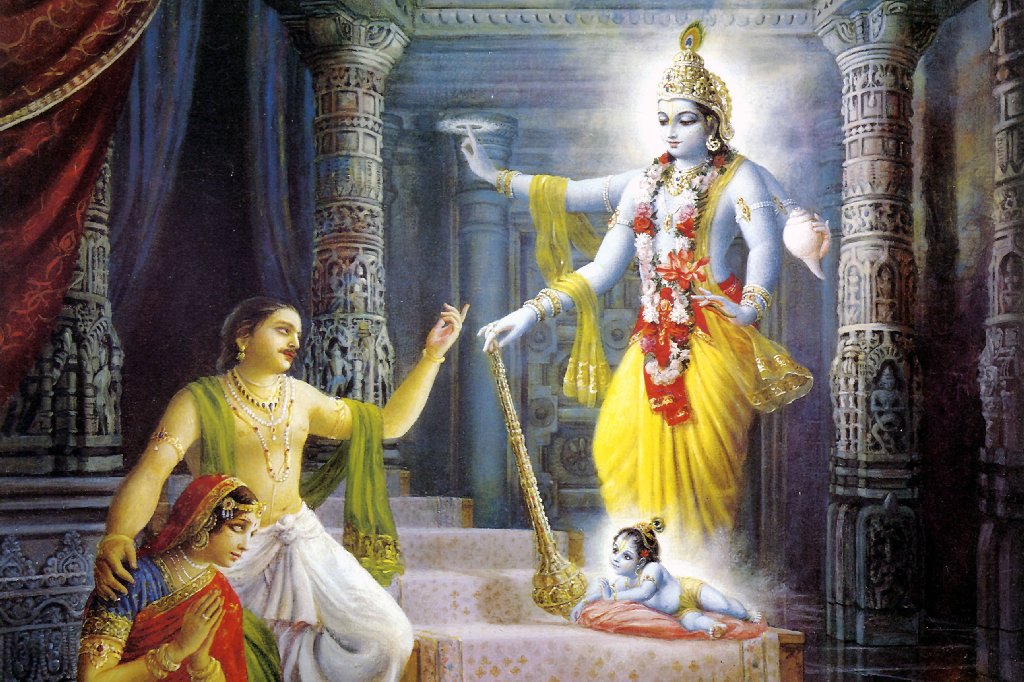 Chapter 3: The Birth of Lord Krishna

(12) Oh son of Bharata, understanding that the child definitely was the Original Personality [Higher spirit], he lost all his fears. Having arrived at that conclusion he enraptured by His majesty fell down with folded hands to offer prayers to the child that illumined His birth place in every direction.

(13) Vasudeva said: 'You my Lordship, are the Original Person Himself transcendental to material nature, You are the absolute understanding and blissfulness [sat-cit-ânanda] in its true form, the intelligence that watches over each.[Higher spirit/Son of God]

(14) You for sure we know as He who, after in the beginning by His personal energy having created this world consisting of the three modes, next seems to have entered [as avatâras] but in reality You did not .  It is like the notion of the material elements [earth, water, air, fire and ether] that have not changed at all, even though they are caught in many combinations of different separated energies [or molecules] that together form the complete of the universe. After in their association having appeared it seems that the  primal elements have entered creation later on, but that entering of this world never took place since they existed there before. The same way oh my Lord, reasoning from true intelligence and such attributes. You, despite being in touch with the objects of the senses and the modes of nature, are not determined by those material qualities at all. You after all [being the complete], are not covered by them. Because You are the root of everyone and everything there is no such thing as a within and a without to You, the Supersoul of all existence .[Higher spirit/Son of God]

(18) Anyone who in the position of being recognizable as a material body continues to act as if he would have an existence for himself separate from the original self or soul, is a fool. He is a person who in his false identification will be rejected as stupid for lacking in proper analysis and missing the full consideration of 'that' [or tat. ].

(19) Oh Almighty Lord, the birth, the maintaining and the ending of this all is there, so conclude the scholars, because of You who are free from inclinations, free from changes and free from the modes. This is not contradictory because You, who are both the Lord and the Supreme Brahman, constitute the solid foundation for the modes of nature

(20) You thus [as that basis, as that transcendence] assume, in order to maintain the three worlds with Your energy, a white form from the Spirit [in goodness and knowledge], the colour red belonging to the passion of creation [the movement] as also the form of darkness [of ignorance] for the purpose of the ultimate destruction.

(21) You now here present oh Mighty One, have appeared in my home as the Completeness of Control with the wish to protect this planet and punish all the demoniac men and their armies, who unenlightened by the millions all over the world pose as kings and statesmen