There is clearly no pain associated with this form of birth as there is during the birth of a real baby through the vagina, because in a false pregnancy, there is no baby, but the energy shooting up the spine and the contractions of the uterus are painful.

One of the intriguing aspects of the human body’s response to pain is that it releases, after a time, endorphins.   Endorphins are present before, during, and immediately after real childbirth and it would appear, they can be released during false labour.  Endorphins can induce feelings of pleasure and euphoria  - they are an opiate, so we are in a sense giving ourselves a dose of naturallly produced opium.

But it appears that the women who helped with this false labour in the Thesmaphoria used opium, and we know this because there are references to the opium poppy in numerous places.

One could infer from this that the whole of the Eleusinian ritual was actually opium induced, but then why the complex story?  And why the complex hairstyles with the coiled snake?  And the upturned thyrsos showing the ‘death’ of the conscious Persephone as she reunites with her mother the Higher spirit [a down turned torch or similar is a sign of the figurative ‘death’ of the will].

If you look at the description of opium under the heading of Dionysos, you will find that opium was in widespread use at the time the Eleusinian rituals were taking place.

The Greeks and Dionysian cults used alcohol to ‘loosen up’ the inhibitions before they practised any sexual kundalini based techniques.  It is possible that the Eleusinian cults used opium.  Opium has its advantages, as it tends not to give you a headache or stomach ache or knock you out.  The disadvantages are obvious if you use it regularly – you become addicted, but the Eleusinians probably only used it in the early stages or the last stage – but all this is speculation.

Narcotics are not generally thought of as sexual enhancers. in fact, the contrary is usually the case: the eidetic upstaging the carnal. But with opium, if you ever get around to it, sexual orgasm can touch astonishingly primal centers. Perhaps part of it is a side effect of the general decrease in sensitivity delaying the orgasm and demanding a prolonged and more insistent intercourse - but when the climax is at last achieved, it seems to split the spine.

In an instant one knows what lizards feel when they mate, and why they clamber onto a sun-warmed rock in the morning. One feels kinship with amphibian consciousness, you know for yourself what frogs legs do when they stop jerking. One even knows, and for an instant must acknowledge, a power greater than the poppy - and this is a knowledge worth remembering.

For if the poppy ever succeeds in sucking out your soul, in having you serve her instead of her, as before, leisurely caressing your hair with her soft fingers, you will need the memory of that glimpse of light.  You will need to know that somewhere raw life exists, that it lives in seemingly imperfect and ephemeral bodies, but that in mundane flesh the universe has triumphed. Without that knowledge, your chances aren't worth a long shot at the dog races.

Beautiful mistress
When I inhale your dark perfume
My deepest longings for love
Are touched and soothed. 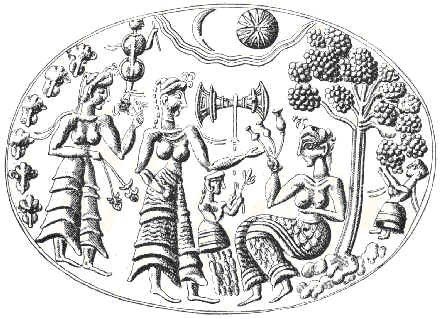 It shows the symbolic grapes of Dionysos, linking the rites to the Dionysian rites; the sun and moon symbolism of Creator/Created and the double axe head, symbolising the two tunnels said to lead to the Creator/Created [often also represented as trumpets and snakes]