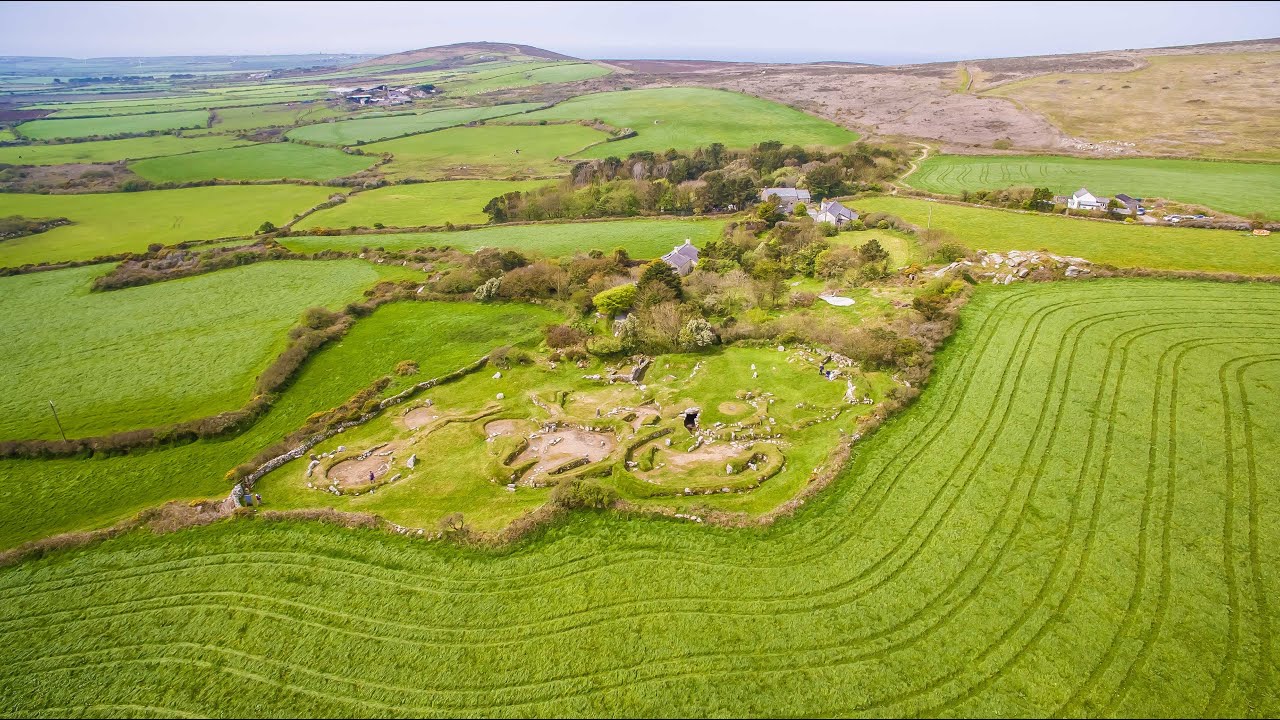 Carn Euny (from Cornish: Karn Uni) is an archaeological site near Sancreed, on the Penwith peninsula in Cornwall, United Kingdom with considerable evidence according to archaeologists “of both Iron Age and post-Iron Age settlement.”

From our point of view it might be better to view the site as one of many belonging to the age of our Ancestors.  Given that many archaeologists are recognising that Britain had a substantial population, even several thousand years ago, that the Fens in particular was heavily populated and that many were displaced Picts, this ancient village is indeed very ancient “Excavations on this site have shown that there was activity at Carn Euny as early as the Neolithic period” and before.

The initial structures were built of timber and as the climate got colder seem to have been replaced by more substantial stone built buildings able to withstand the wind and cold and provide better shelter. The remains of these stone buildings are still visible today. 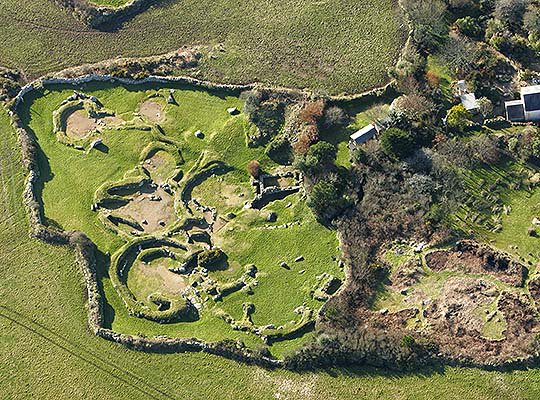 West of the settlement are a pair of ancient wells. One is mentioned in The Legendary Lore of the Holy Wells of England of 1893 where William Borlase states (writing in the 1750s):

"I happened luckily to be at this well upon the last day of the year, on which, according to vulgar opinion, it exerts its principal and most salutary powers. Two women were here, who came from a neighbouring parish, and were busily employed in bathing a child. They both assured me that people who had a mind to receive any benefit from St. Euny's Well must come and wash upon the three first Wednesdays in May. Children suffering from mesenteric disease should be dipped three times in Chapel Uny widderschynnes, and widderschynnes dragged three times round the well."

The site is egg shaped and there are eggs within eggs within eggs, indicating that the level of spiritual knowledge of the people who built the site was advanced. This does not make it an exclusively spiritual site, it simply means that all buildings were built on sacred lines.

Carn Euny  is one of the best-preserved ancient villages in South West England, one can see the foundations of stone houses with walls up to a metre high in places. At the heart of the village is its most intriguing feature – a stone-walled underground passage known as a fogou. This mysterious type of Iron Age monument is found only in the far west of Cornwall.

Carn Euny’s fogou is in a well-preserved state.  It is an underground passageway, which is more than 65 feet (20 metres) long. This fogou runs just below the surface of the ground and is roofed with massive stone slabs.

A fogou is the name given to these underground, dry-stone structures in Cornwall. However, fogous have similarities with the souterrains of northern Europe and the underground passages found in Scotland, especially Orkney. Fewer than 15 confirmed fogous have been found. 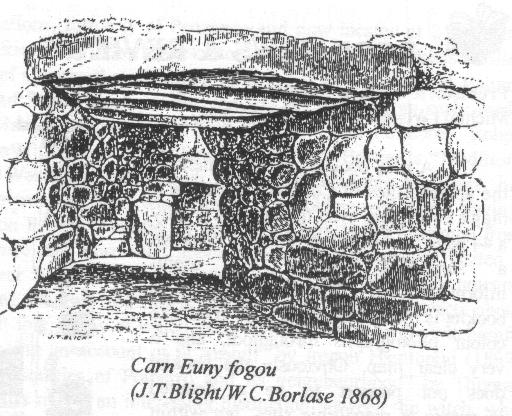 Fogous were constructed by excavating a sloping trench about 5 ft (1.5 m) wide and 6 ft (1.8 m) deep, lining it with drystone walling, which was battered inwards and roofing it with flat slabs; soil from excavation could be heaped on top as at Pendeen Vau, when of course it became a real underground secret passage or by being incorporated in the rampart of the enclosure as at Halliggye Fogou, Trelowarren.

The purpose of the fogou is no longer known. Their central location in settlements and the work that evidently went into constructing them is indicative of their importance to the community.   There have been numerous suggestions

Note that there is no reason to assume the passageways were exclusively used for only one of these purposes.  Rebirth ceremonies were not frequent, so in between they might have used them for food. 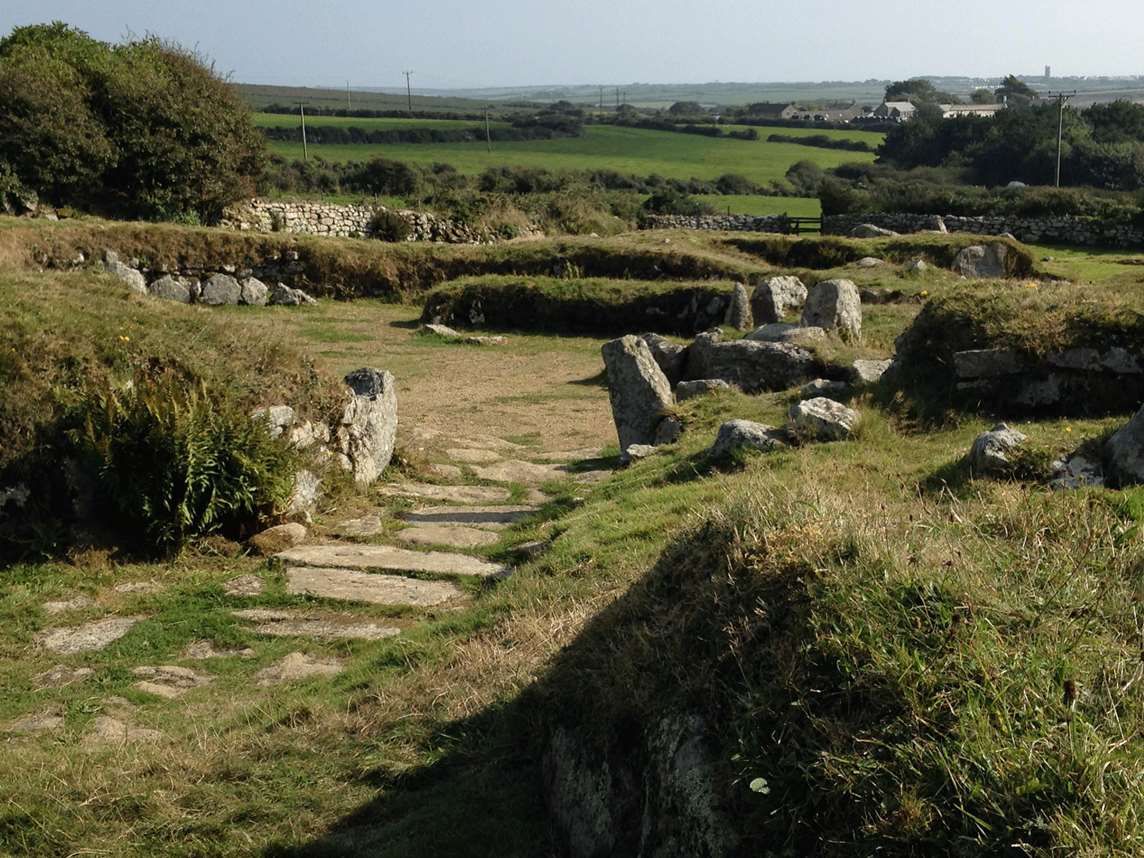 The term fougou may be related to the Cornish words fow (plural fowys) and/or gogow (plural gogowyow), both meaning "cave".  Indicating they served the same purpose as a cave.

Halliggye Fogou on the Trelowarren estate is generally accepted to be the largest and best surviving fogou. But as we have seen above, an unspoiled fogou survives at Carn Euny, and more can be found at Boleigh Fogou near Lamorna, Pendeen Vau and Trewardreva near Constantine, the last of which is known locally as Pixie's Hall or Piskey Hall.  The latter name somewhat supports the idea that either those who used them were very small – a race of people short in stature – or that the visions conjured up during the rebirth ceremonies included the Pixies.  Note that Neanderthals were indeed small and folklore supports the idea of visions where one can indeed meet the pixies, mostly magic mushroom pixies.