The Lia Fáil (Irish for "big stone of Fál",) is also known as the Stone of Destiny.

It is a stone at the Inauguration Mound on the Hill of Tara in County Meath in Ireland which served as the coronation stone for the High Kings of Ireland. In legend, all of the kings of Ireland were crowned on the stone up to Muirchertach mac Ercae c. AD 500.

It is the physical counterpart of the Lia Fáil seen in visionary experiences in antiquity by the ‘semi-divine race’  known as the Tuatha Dé Danann. They brought with them  four legendary treasures – all having symbolic meaning 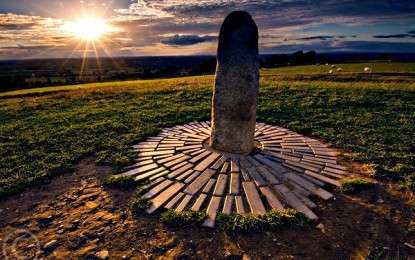