In understanding the sacred geometry of Dholavira, one has to see the site in the context of the entire landscape.  The island itself is shaped like a crescent moon; whether it was in the days Dholavira was built is open to speculation, but a crescent moon is symbolic and is associated with the practises of Shivaism [Shaktism] and sexual methods.  If it was not a crescent moon and erosion has washed away one side, then it might have been Egg shaped, again symbolically important 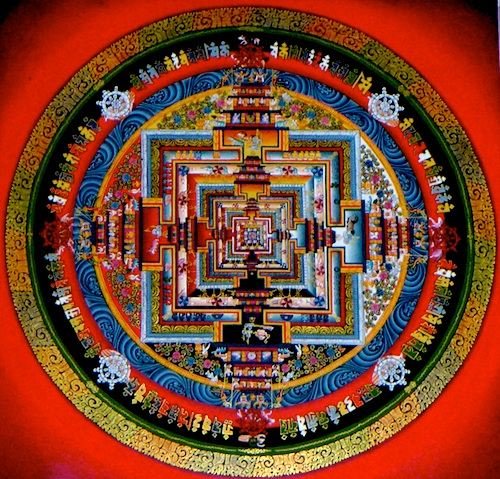 example mandala to show the principle

The easiest way to think of the site is like a slightly 3D version of a mandala which is a map of the spiritual world.  The grid like pattern of the city is a mirror of the Matrix.

The description from Wikipedia judges the city by an archaeologist's limited perspective that all cities had walls as defensive structures and that water features had to have a practical purpose – storm drains!

This was a symbolic structure, and the channels may well have had a practical purpose, but the water was far more important symbolically. 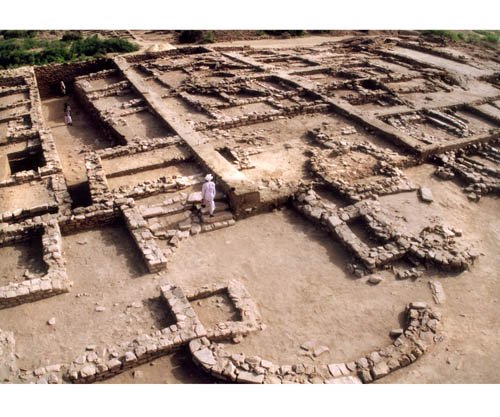 The city of Dholavira has a rectangular shape and organization, and is spread over 22 ha (54 acres). The area measures 771.1 m (2,530 ft) in length, and 616.85 m (2,023.8 ft) in width. Unlike Harappa and Mohenjo-daro, the city was constructed to a pre-existing geometrical plan consisting of three divisions – the citadel, the middle town, and the lower town. The acropolis and the middle town had been furnished with their own defence-work, gateways, built-up areas, street system, wells, and large open spaces. 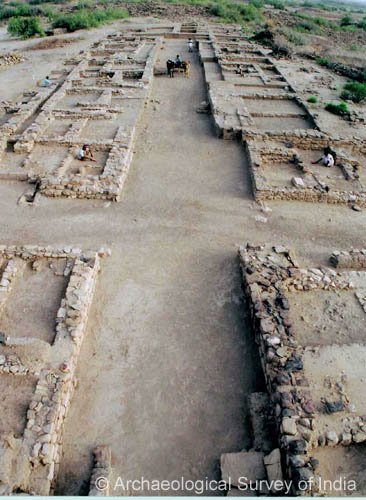 The acropolis is the most thoroughly fortified and complex area in the city, of which it appropriates the major portion of the southwestern zone. The towering "castle" is defended by double ramparts. Next to this stands a place called the 'bailey' where important officials lived. The city within the general fortifications accounts for 48 ha (120 acres). There are extensive structure-bearing areas which are outside yet integral to the fortified settlement. Beyond the walls, another settlement has been found. The most striking feature of the city is that all of its buildings, at least in their present state of preservation, are built of stone, whereas most other Harappan sites, including Harappa itself and Mohenjo-daro, are almost exclusively built of brick. Dholavira is flanked by two storm water channels; the Mansar in the north, and the Manhar in the south.

Crescent moon
Egg (as symbol)
Map of the Egg