Larsa - And the Great Hymn to Shamash 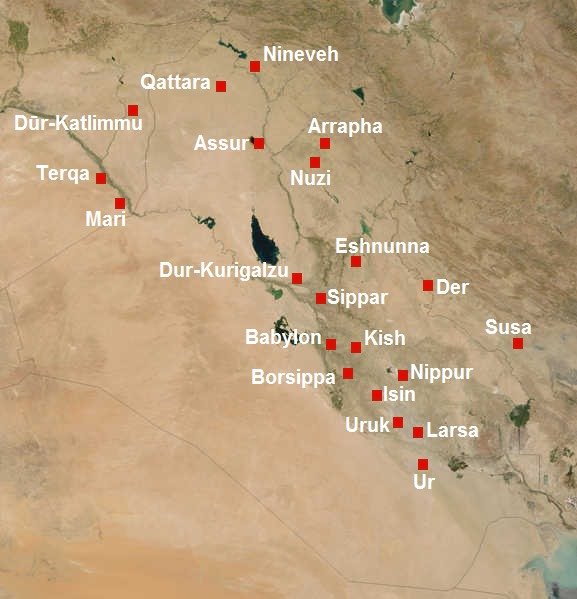 Larsa was an important city of ancient Sumer, the centre of the cult of the sun god Utu also known as Shamash. It lies some 25 km southeast of Uruk in Iraq's Dhi Qar Governorate, near the east bank of the Shatt-en-Nil canal at the site of the modern settlement Tell as-Senkereh or Sankarah.

It was built on sacred geography principles. The remains of Larsa cover an oval about 4.5 miles in circumference – the Egg. The highest point is around 70 feet in height.   The brief excavations conducted in Larsa in 1933 by André Parrot revealed a ziggurat, a temple to the sun god, and a much later palace for Nur-Adad (c. 1865-c. 1850 BC).

This somewhat indicates that this city state suffered the same fate as the other city states.  An early [4000 BC – 3000 BC] rise to wealth as it was run along spiritual lines and then a decline as kings took over seizing permanent power, seizing territory and making war with other city states

The historical "Larsa" was already in existence as early as the reign of Eannatum of Lagash, for example, who annexed it to his empire.  Larsa grew powerful, but it never accumulated a large territory. At its peak under king Rim-Sin I (ca. 1758 - 1699 BC), Larsa controlled only about 10-15 other city-states — nowhere near the territory controlled by other dynasties in Mesopotamian history. “Nevertheless, huge building projects and agricultural undertakings can be detected archaeologically”.

Rather than show a hypothetical plan of Larsa we have selected a beautiful Hymn instead.  The Great Hymn to Shamash is among the longest and most beautiful of the hymns that have come down to us in cuneiform, and “ranks as one of the best products of Mesopotamian religious writing”.

A vessel in the form of an egg; gold, lapis lazuli, red limestone, shell and bitumen 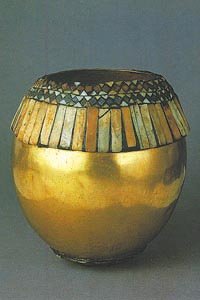 THE GREAT HYMN TO SHAMASH

21. You climb to the mountains surveying the earth,
22. You suspend from the heavens the circle of the lands.
23. You care for all the peoples of the lands,
24. And everything that Ea, king of the counsellors, had created is entrusted to you.
25. Whatever has breath you shepherd without exception,
26. You are their keeper in upper and lower regions.
27. Regularly and without cease you traverse the heavens,
28. Every day you pass over the broad earth. . . .
33. Shepherd of that beneath, keeper of that above,
34. You, Shamash, direct, you are the light of everything.
35. You never fail to cross the wide expanse of sea,
36. The depth of which the Igigi know not.
37. Shamash, your glare reaches down to the abyss
38. So that monsters of the deep behold your light. . . .
45. Among all the Igigi there is none who toils but you,
46. None who is supreme like you in the whole pantheon of gods.
47. At your rising the gods of the land assemble,
48. Your fierce glare covers the land.
49. Of all the lands of varied speech,
50.. You know their plans, you scan their way.
51.. The whole of mankind bows to you,
52. Shamash, the universe longs for your light. . . .

97. You give the unscrupulous judge experience of fetters,
98. Him who accepts a present and yet lets justice miscarry you make bear his punishment.
99. As for him who declines a present but nevertheless takes the part of the weak,
100.. It is pleasing to Shamash, and he will prolong his life. . . .

124. The progeny of evil-doers will [fail.]
125. Those whose mouth says 'No'-their case is before you.
126. In a moment you discern what they say;
127. You hear and examine them; you determine the lawsuit of the wronged.
128. Every single person is entrusted to your hands;
129. You manage their omens; that which is perplexing you make plain.
130. You observe, Shamash, prayer, supplication, and benediction,
131. Obeisance, kneeling, ritual murmurs, and prostration.
132. The feeble man calls you from the hollow of his mouth,
133. The humble, the weak, the afflicted, the poor,
134. She whose son is captive constantly and unceasingly confronts you.
135. He whose family is remote, whose city is distant,
136. The shepherd [amid) the terror of the steppe confronts you,
137. The herdsman in warfare, the keeper of sheep among enemies.
138. Shamash, there confronts you the caravan, those journeying in fear,
139. The travelling merchant, the agent who is carrying capital.
140. Shamash, there confronts you the fisherman with his net,
141. The hunter, the bowman who drives the game,
142. With his bird net the fowler confronts You.
143. The prowling thief, the enemy of Shamash,
144. The marauder along the tracks of the steppe confronts you.
145. The roving dead, the vagrant soul,
146. They confront you, Shamash, and you hear all.
147. You do not obstruct those that confront you. . . .
148. For my sake, Shamash, do not curse them!
149. You grant revelations, Shamash, to the families of men,
150. Your harsh face and fierce light you give to them. . . .

154. The heavens are not enough as the vessel into which you gaze,
155. The sum of the lands is inadequate as a seer's bowl.......
159. You deliver people surrounded by mighty waves,
160. In return you receive their pure, clear libations. . . .
165. They in their reverence laud the mention of you,
166. And worship your majesty for ever. . . .
174. Which are the mountains not clothed with your beams?
175. Which are the regions not warmed by the brightness of your light?
176. Brightener of gloom, illuminator of darkness,
177. Dispeller of darkness, illuminator of the broad earth.

Egg (as symbol)
Map of the Egg
Sun and Moon

Believing in the spiritual world
Creating a sacred geography