Coba means ‘wind ruffled water’.  It is situated amidst a group of lakes in the state of Quintana Roo.  The city flourished during the late Maya classic period AD 600 to 900 and it had an estimated population of about 55,000.  Some buildings were built as late as 1450.  There were Maya still living here when the Spanish arrived, but they were never discovered, the first white man to see the site was an Austrian Teobert Maler in 1891.

The site was connected with the Maya god of honey and this was in both a symbolic and actual sense, as the centre became both an important cultural and commercial centre for honey and cocoa.

Air surveys have revealed a very complex network of White Roads linking sites, covering well over 27 square miles.  Whilst other sites are known to have sacbes, 16 major ones have been discovered at Coba so far.  All these run in straight lines and link in various star patterns to the main ceremonial site.  The roads were surfaced with a dense hard mass of limestone, over a rubble base and in some cases were as wide as a modern two lane highway.  The sacbe connecting Coba and Yaxuna is 62 miles long, is 30 foot wide, and elevated 2 to 8 feet above the ground.

Only a small part of the city, which is now covered by scrub has been uncovered.  The most noticeable is the so-called Coba group which contains an 80 foot pyramid of 9 tiers.  About a mile from this group is the Castillo, another pyramid of over 120 feet.  The architecture changed over time and columned temples with painted lintels were used. 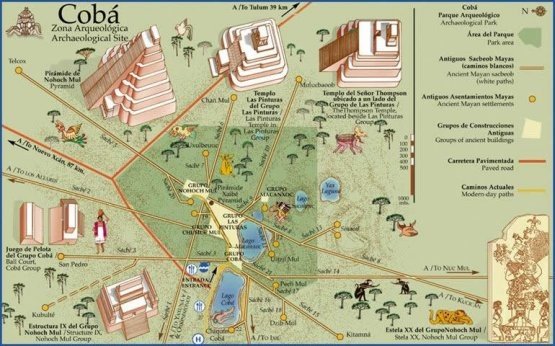