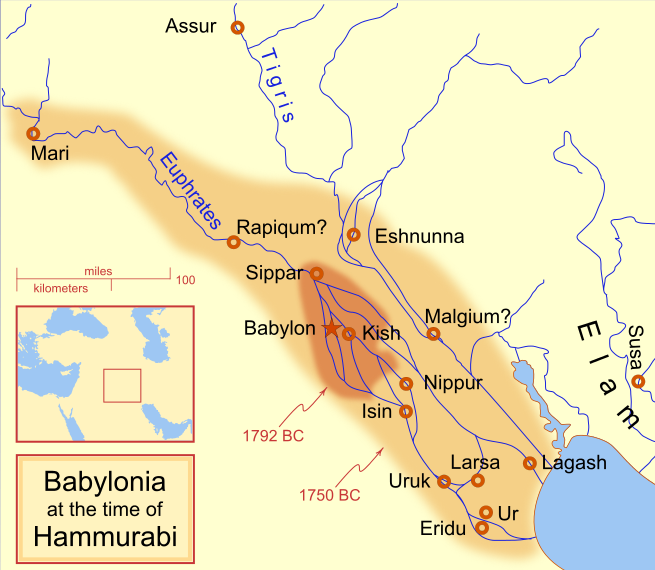 Lagash is an ancient city located northwest of the junction of the Euphrates and Tigris rivers and east of Uruk, about 22 kilometres (14 mi) east of the modern town of Ash Shatrah, Iraq.

Lagash was one of the oldest cities of the Ancient Near East.   It was a city state and at the time was located near the coast.  It may even have been in the very distant past, an island or isthmus, adding to the sacredness of the site.  It was laid out using the principles of sacred geography.  Lagash's main temple was the E-Ninnu, dedicated to the god Ningirsu - SATURN.

Lagash had become an important Sumerian city state by the late 3rd millennium BC.   One can speculate here [and it is speculation] that the early Sumerians built their city states in the order in which the universe was said to be created.  Myths from many cultures indicate that creation was completed in a spiral fashion with successive levels and layers being created – one after the other.  If we look at the Map of the Egg, then after the city to Anu, [centre portion of the Egg] there would have been the city to the Created and Creator, then the city or cities for the Signs of the Zodiac.  The next city may well have been for Saturn. 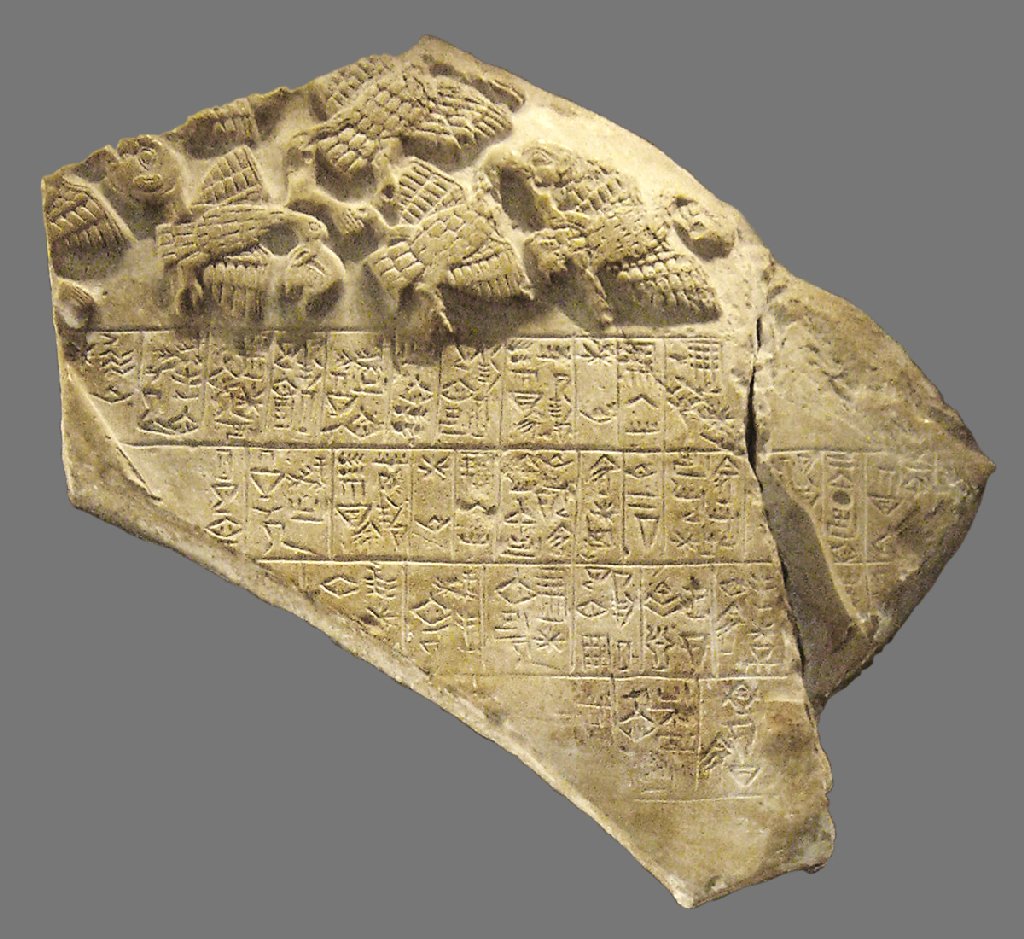 Stele of the vultures

This means that by 3000 BC, Lagash would already have been a very old city and indeed this is somewhat born out by the historical records, because by the late 3rd millennium and early 2nd millennium BC, things had already deteriorated and it was ruled by independent hereditary kings, Ur-Nanshe (24th century BC) and his successors.  Furthermore, these kings were in conflict with the Elamites on the east and the kings of "Kienĝir" and Kish on the north.   So the city had sunk from ‘defenders of the faith’ to attackers trying to gain power and territory.   Conflict after conflict is recorded.  In c.2450 BC, Lagash and the neighbouring city of Umma fell out with each other after a border dispute.  As described in Stele of the Vultures the then king of Lagash,  “inspired by the patron god of his city, Ningirsu”, set out with his army to defeat the nearby city.  Despite being struck in the eye by an arrow, the king of Lagash lived on to enjoy his army's victory.  Entemena (flourished 2400 BC) was a son of En-anna-tum I, and he reestablished Lagash as a power in Sumer. He defeated Illi of Umma, with the aid of Lugal-kinishe-dudu of Uruk

This aggression rebounded on the kings in question, because with the Akkadian conquest Lagash lost its independence and its ruler and became subject to Sargon of Akkad and his successors. Sargon of Akkad  reigned from about 2334 BC – 2279 BC. 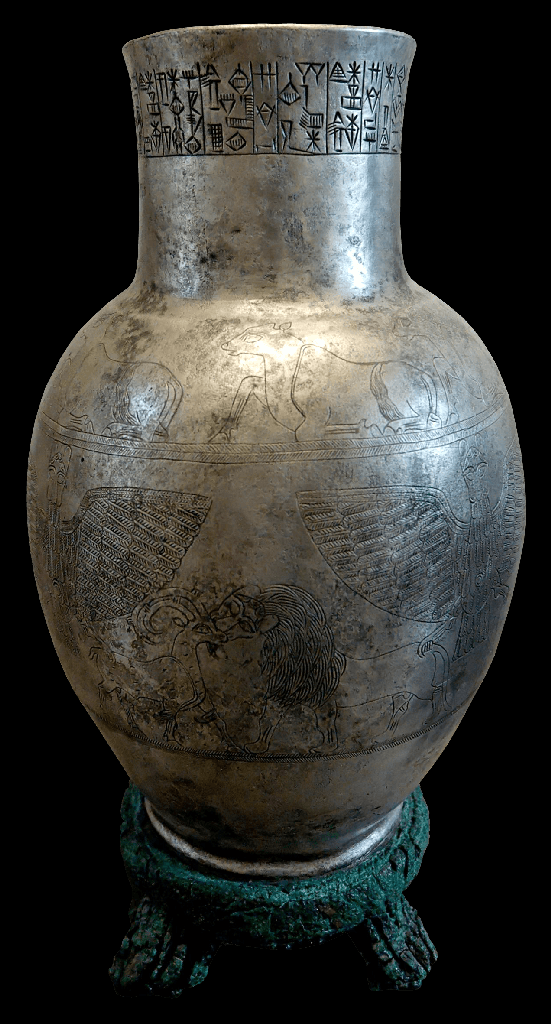 After the collapse of Sargon's state, Lagash again thrived under its independent kings, Ur-Bau and Gudea, and had extensive commercial communications with distant realms. But it was not a spiritual city, it was a trading city with thriving craft industries -  Gudea brought cedars from the Amanus and Lebanon mountains in Syria, diorite from eastern Arabia, copper and gold from central and southern Arabia, while his armies were engaged in battles with Elam on the east.

And we have evidence that the true spiritual nature of Lagash had been destroyed, in the statues that Gudea erected to himself in the belief that he was a god.   He placed numerous statues or idols depicting himself with lifelike realism, (Statues of Gudea) in temples throughout his city. And he moved his centre to Girsu.  Again more speculation, but the spiritually aware choose their sites based on whether they are places of power and also whether they can be adapted to conform to the principles of sacred geography.  Water is key, islands are greatly valued and places of power often have the joining of telluric currents, surrounding mountains and the presence of a large hill are also valued.

A king aiming to extend his territory influence and trading routes, however, chooses his capital on the basis of whether he can make it easy to defend, and whether the roads in and out go to the right places for communication and trading.  Accessibility and defendability are thus the two criteria.  Girsu was quite probably these two things, and the original city state of Lagash would have languished, uncared for and unappreciated:

“Soon after the time of Gudea, the state of Lagash was absorbed into the Ur III state as one of its prime provinces. There is some information about the area during the Old Babylonian period. After that it seems to have lost its importance; at least we know nothing more about it until the construction of the Seleucid fortress mentioned, when it seems to have become part of the Greek kingdom of Characene.”

So the old Lagash is the only city state we should be interested in spiritually and the ideal is to know what it was like before the 3rd millennium.  One extremely fragmentary tablet has been found in Sumerian, which recounts how after the flood mankind was having difficulty growing food for itself, being dependent solely on rainwater; it further relates that techniques of irrigation and cultivation of barley were then imparted by the gods, showing that at the time of the tablet, the people were spiritually very active.

The King list describes the Ages of Man and unsurprisingly the Dynasties of Lagash are not found on the Sumerian King List.

Goddess Nisaba with an inscription of Entemena, ruler of Lagash (2430 BC).  The goddess has a crown, pigtails and wings.  The crown is formed from twin horns and a central portion which may indicate a form of jesters hat - cap and bells.