Babylon - The Ziggurat of Etemanki 02

A Neo-Babylonian royal inscription of Nebuchadnezzar II on a stele from Babylon, claimed to have been found in the 1917 excavation by Robert Koldewey, and of uncertain authenticity, reads: "Etemenanki Zikkurat Babibli [Ziggurat of Babylon] I made it, the wonder of the people of the world, I raised its top to heaven, made doors for the gates, and I covered it with bitumen and bricks."

The Etemenanki is depicted in shallow relief, showing its high first stages with paired flights of steps, five further stepped stages and the temple that surmounted the structure. A floor plan is also shown, depicting the buttressed outer walls and the inner chambers surrounding the central cella.

The Schoyen Collection has the oldest known representation of the Etemenanki. Carved on a black stone, The Tower of Babel Stele (as it is known) dates from 604-562 BC, the time of Nebuchadnezzar II.

The Etemenanki is described in a cuneiform tablet from Uruk from 229 BCE, a copy of an older text (now in the Louvre in Paris). It gives the height of the tower as seven stocks (91 meters) with a square base of 91 meters on each side. This mud brick structure was confirmed by excavations conducted by Robert Koldewey after 1913. Large stairs were discovered at the south side of the building, where a triple gate connected it with the Esagila. A larger gate to the east connected the Etemenanki with the sacred procession road (now reconstructed in the Pergamon Museum in Berlin). 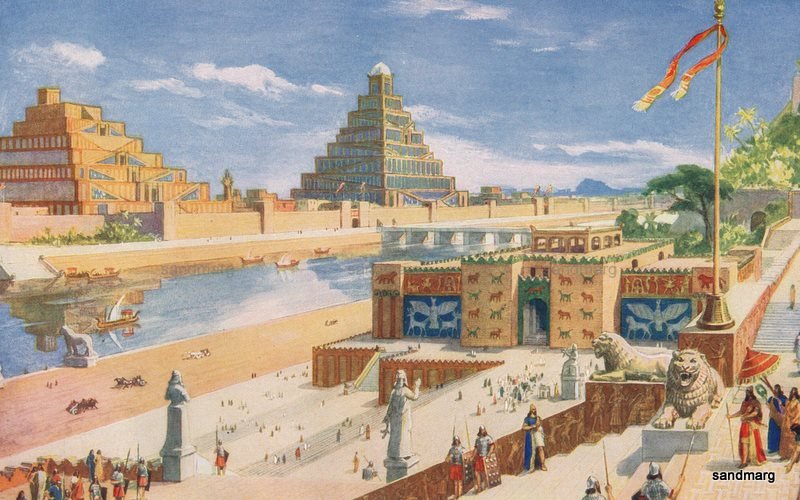 Babylon's outer wall is the main defence of the city. There is, however, a second inner wall, of less thickness than the first, but very little inferior to it in strength. The center of each division of the town was occupied by a fortress. In the one stood the palace of the kings, surrounded by a wall of great strength and size: in the other was the sacred precinct of Jupiter [Zeus] Belus, a square enclosure two furlongs [402 m] each way, with gates of solid brass; which was also remaining in my time. In the middle of the precinct there was a tower of solid masonry, a furlong [201 m] in length and breadth, upon which was raised a second tower, and on that a third, and so on up to eight. The ascent to the top is on the outside, by a path which winds round all the towers. When one is about half-way up, one finds a resting-place and seats, where persons can sit for some time on their way to the summit. On the topmost tower there is a spacious temple, and inside the temple stands a couch of unusual size, richly adorned, with a golden table by its side. There is no statue of any kind set up in the place, nor is the chamber occupied of nights by any one but a single native woman, who, as the Chaldeans, the priests of this god, affirm, is chosen for himself by the deity out of all the women of the land.