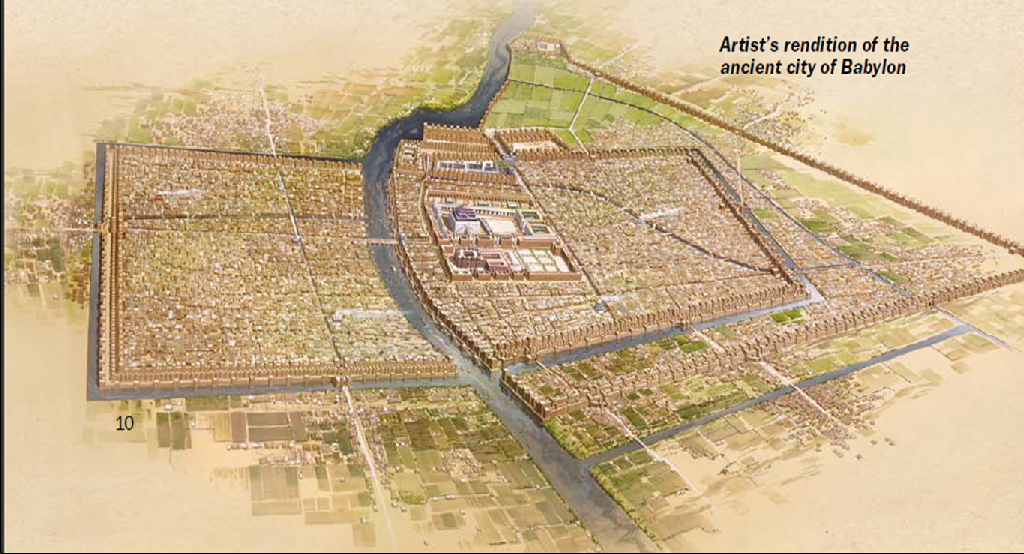 The plan in Herodotus' time

When Herodotus the Greek historian wrote about Babylon, the city was square in plan.  Herodotus wrote in the fifth century BC and it is clear much of the underlying spiritual knowledge which served as the foundation for its buildings and architecture had been lost:

Herodotus – The Histories – Book One

Babylon, to which the seat of government was transferred after the fall of Nineveh, lies in a wide plain, a vast city in the form of a square with sides nearly fourteen miles long and a circuit of some fifty-six miles, and in addition to its enormous size it surpasses in splendour any city of the known world. It is surrounded by a broad deep moat full of water, and within the moat there is a wall fifty royal cubits wide and two hundred high (the royal cubit is three inches longer than the ordinary cubit).

And now I must describe how the soil dug out to make the moat was used, and the method of building the wall. While the digging was going on, the earth that was shovelled out was formed into bricks, which were baked in ovens as soon as a sufficient number were made; then using hot bitumen for mortar the workmen began by revetting with brick each side of the moat, and then went on to erect the actual wall. In both cases they laid rush-mats between every thirty courses of brick. On the top of the wall they constructed, along each edge, a row of one-roomed buildings facing inwards with enough space between for a four-horse chariot to pass.

There are a hundred gates in the circuit of the wall, all of bronze with bronze uprights and lintels.  Eight days' journey from Babylon there is a city called Is on a smallish river of the same name, a tributary of the Euphrates, and in this river lumps of bitumen are found in great quantity.  This was the source of supply for the bitumen used in building the wall of Babylon. The Euphrates, a broad, deep, swift river which rises in Armenia and flows into the Persian Gulf, runs through the middle of the city and divides it in two. The wall is brought right down to the water on both sides, and at right angles to the wall, there is a low fencing wall of baked bricks, stretching down each bank of the river. There are a great many houses of three and four storeys.

The main streets and the side streets which lead to the river are all dead straight, and for every one of the side streets or alleys there was a bronze gate in the river wall by which the water could be reached.  The great wall I have described is the chief armour of the city; but there is a second one within it, hardly less strong though narrower. There is a fortress in the middle of each half of the city: in one the royal palace surrounded by a wall of great strength, in the other the temple of Bel [Marduk], the Babylonian Zeus.

In 689 BC the Chaldean forces in Babylon were being attacked by the Assyrians.  They held out for 9 months, but finally succumbed to famine and disease.  Sennacherib abandoned the long standing Assyrian policy of leniency towards the city and the Assyrian king allowed his troops an unrestrained hand in its sacking.  Babylon was systematically destroyed and then burned.  The rubble was thrown into the Euphrates.  It was then deliberately flooded and ‘the city’s very foundations were destroyed’.

I made its destruction more complete than that by a flood, that in days to come the site of the city and its temples and gods might not be remembered; I completely blotted it out with floods of water and made it like a meadow

Nebuchadnezzar II predated Herodotus by about a century, but his impact was enormous.  He instigated a massive and complete rebuilding programme creating ‘one of the most glorious cities in the ancient world, a dazzling urban vista of towering temples, shrines and palaces’ but it was a city of the ego, not a spiritual city.  He tried but he failed to recreate the glory of old Babylon, because he simply was not spiritually aware. He appears to have some of the symbolism, but it was of the sort - 'do not walk under ladders' - without understanding why - a superstition rather than an understanding.

This was the city Herodotus saw – not the spiritual city.

Old Babylon was the city state of  Adad or Hadad, JUPITER.  When Marduk was introduced by the Babylonians, they also associated him with a planet.  Jupiter was associated with Marduk by the Hammurabi period.  So Old Babylon must have been quite special, before Hammurabi and Marduk.

It appears that Nebuchadnezzar II rebuilt everything – including the Etemanki ziggurat.  But he built this too without understanding, without the spiritual understanding that underlies the earlier cities when knowledge of the spiritual world was at its height.

Nebuchadnezzar II was an obsessive military campaigner.  He led the Babylonian army into Egypt in 605 BC routing his enemy and in 597 BC he attacked Jerusalem and according to the book of Kings

Carried away all Jerusalem, and all the princes and all the mighty men of valour, even 10,000 captives and all the craftsmen and smiths, none remained save the poorest sort of the people of the land.

And so we know where he got the people from to rebuild the city.  So massive was his ego, so full of himself was Nebuchadnezzar that he made a massive image of himself for others to worship

As such Babylon, despite all the legends about it, all the tales of glory, was possibly the least spiritually active city in the area.  If it had a sacred geography, it was a poor attempt to copy something that had been destroyed aeons before.

We have not speculated on what Babylon in its original form may have looked like. 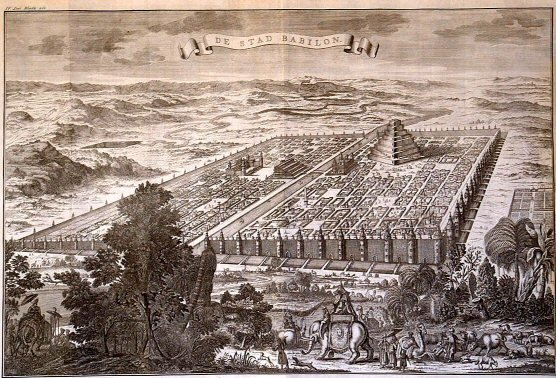