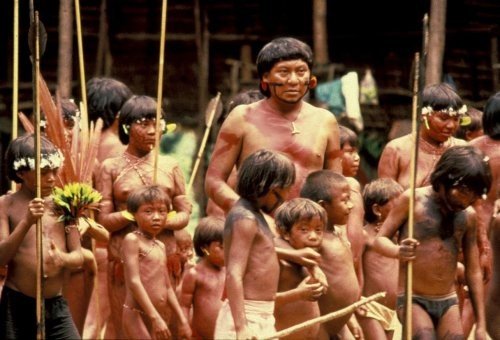 A cultural element characteristic of the Desana, but disappearing now, is the dance shield (vabdro). It consists of a large disk woven of reeds, some sixty centimeters in diameter, with a small, conical protuberance in the centre. The border is decorated with several feather tassels.

The word bero means circle, but the verb vaberi is to dive, to move the water, and alludes to the similarity between the shield and the concentric waves produced by an object as it falls into the water. The verbalization is the following:

“the shield protects its bearer against the waves, which are the evil deeds and  intentions of an enemy, or against the revenge of Vai-mahse.

Besides, it is imagined that the outer part of the shield reflects a red light while the interior reflects a pink light, ….. The shield is worn in dances, hanging from the left forearm, and is generally combined with a stick-rattle. In the invocations to "protect the good life" the paye gives each man, in imagination, one of these shields to protect him against evil influence.

It is said that the Sun Father, when he created the Universe, carried a shield on his arm.