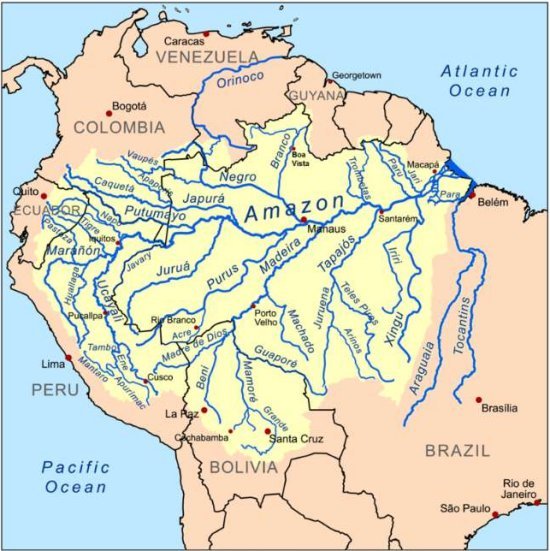 South America is a vast continent, but like Africa, it is possible to treat it in spiritual terms as one, as the beliefs of the indigenous peoples of the region are remarkably homogeneous.

Although I do have observations for the Southern areas of South America, by far the largest amount of work by anthropologists has been undertaken in the Amazon basin, as such there are more observations for this area.  I have treated the Incas separately as this culture developed a set of beliefs which have been documented extensively. 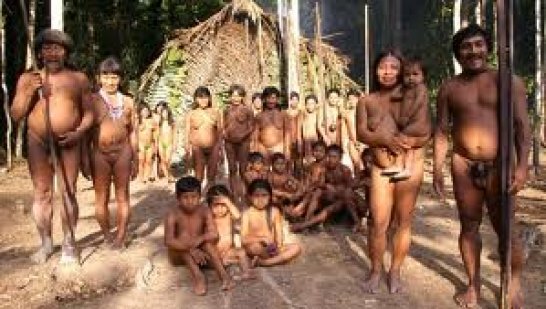 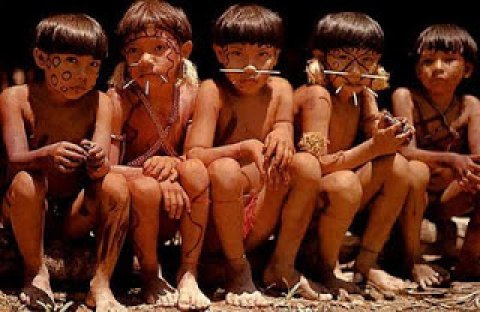 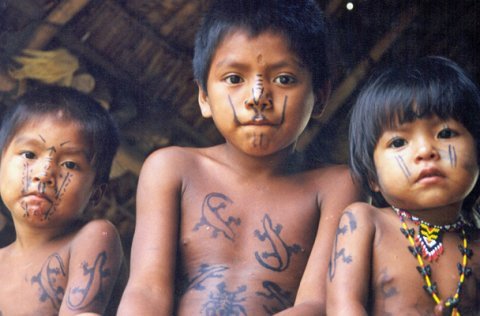 The Amazon is the world’s largest rain-forest. It is also the ancestral home of 1 million Indians.  They are divided into about 400 tribes, each with its own language, culture and territory.  Many have had contact with outsiders for almost 500 years. Others – ‘uncontacted’ tribes – have had no contact at all.

The largest tribe today is the Guarani, numbering 51,000, but they have very little land left. During the past 100 years almost all their land has been stolen from them and turned into vast, dry networks of cattle ranches, soya fields and sugar cane plantations. Many communities are crammed into overcrowded reserves, and others live under tarpaulins by the side of highways.

The people with the largest territory are the relatively isolated 19,000 Yanomami, who occupy 9.4 million hectares in the northern Amazon, an area about the same size as the US state of Indiana and slightly larger than Hungary. The largest Amazonian tribe in Brazil is the Tikuna, who number 40,000.

The smallest consists of just one man, who lives in a small patch of forest surrounded by cattle ranches and soya plantations in the western Amazon, and eludes all attempts at contact.

Many Amazonian peoples number fewer than 1,000. The Akuntsu tribe, for example, now consists of just five people, and the Awá just 450.

Most Indians live in settled villages by the rivers, and grow vegetables and fruits like manioc, corn, beans and bananas.  They also hunt and fish, using plant-based poisons to stun the fish. Some tribes use shotguns for hunting, others use bows and arrows, spears, or blowguns with darts tipped with curare.

Only a few Amazonian tribes are nomadic; they tend to live deep in the forest away from the rivers. They grow some crops but rely more on hunting and gathering.

If we take an example, the Yanomami cultivate 500 plants for foods, medicines, house-building and other needs. They use nine different plant species just for fish poison. The Tukano recognize 137 varieties of manioc.

Guaraná, the ubiquitous fizzy cola drink in Brazil, was known to the Satere Mawe Indians long before it was commercialized. They would roast the seeds, grind them into a powder mixed with water, and drink it before setting off on a hunt.

Many Brazilian Indian tribes like those of the Xingu Park, the Yanomami and the Enawene Nawe live in malocas – large communal houses – which shelter extended families, who string their hammocks from the rafters and share food around family hearths.  The society is a caring, sharing society.  Loneliness is probably unknown.

Why is it taking so long to believe that if we hurt nature, we hurt ourselves? We are not watching the world from without. We are not separate from it.’
Davi Kopenawa Yanomami

When the first European colonists arrived in 1500, what is now Brazil was inhabited by an estimated 11 million Indians, living in about 2,000 tribes. Within the first century of contact, 90% were wiped out, mainly through diseases imported by the colonists, such as flu, measles and smallpox. In the following centuries, thousands more died, enslaved in the rubber and sugar cane plantations.

By the 1950s, the population had dropped to such a low that the eminent senator and anthropologist Darcy Ribeiro predicted there would be none left by the year 1980. On average, it is estimated that one tribe became extinct every year over the last century.

In 1967, a federal prosecutor named Jader Figueiredo published a 7,000 page report cataloguing thousands of atrocities and crimes committed against the Indians, ranging from murder to land theft to enslavement.

In one notorious case known as ‘The massacre of the 11th parallel’, a rubber baron ordered his men to hurl sticks of dynamite into a Cinta Larga village. Those who survived were murdered when rubber workers entered the village on foot and attacked them with machetes.  The report made international headlines and led to the disbanding of the government’s Indian Protection Service (SPI) which was replaced by FUNAI. This remains the government’s indigenous affairs department today.

When the Amazon was opened up for development by the military in the 1960s, 70s and 80s, a new wave of hydro-electric dams, cattle ranching, mines and roads meant tens of thousands of Indians lost their lands and lives. Dozens of tribes disappeared forever.

Almost all the Indians’ current problems revolve around land: outsiders either want their land, or something on or underneath it. The key threats are a massive boom in oil and gas exploration, rampant illegal logging and the rapid spread of ranching and farming.  Indian tribes whose lands are respected generally thrive. But in Brazil Indians have no communal land ownership rights, while in Peru and Colombia many villages secured land title decades ago, but governments and companies regularly ride rough-shod over their rights.

‘This here is my life, my soul. If you take the land away from me, you take my life.’
Marcos Veron, Guarani

Five centuries after the first Europeans entered Amazonia, many Indians are still dying at the hands of outsiders, and entire tribes continue to face the threat of annihilation.  Amazon tribes like the Nukak, for example, are severely threatened, two thirds of whom have died in the 20 years since contact.

Like tribal peoples throughout the world, indigenous South Americans have very deep spiritual connections to their land. This is reflected in their rich oral history, cosmology, myths and rituals.

Some tribes take hallucinogenic drugs, which enable them to journey to other worlds to connect with spirits, and to cure sickness. This is not casual or recreational, but takes years of training and initiation.  Yanomami shamans, for example, inhale yakoana or yopo, a hallucinogenic snuff, in order to call on their shamanic spirits, or xapiri. The xapiri play a crucial role in healing ceremonies and during the reahu, or funeral feast.

Shamans of tribes such as the Kaxinawá and Ashaninka drink ayahuasca during healing sessions. Others like the Arawete and Akuntsu smoke tobacco, or inhale it as snuff.

These practises, however, have tended to totally overshadow a set of probably much more frequently used practises.  The Awá, for example, take no stimulants or drugs, but go into a trance through the power of rhythmic dancing and clapping just like their Australian aboriginal and African cousins.

But never discussed, never revealed is the extensive, truly extensive use of sexually based techniques.  Like the Maya, the Aztecs and the Native American Indians with their 'sacred pipe', the South American Indians relied on kundalini energy released via sexual practises, sexual stimulation and sex magick.

Which may be why the photos one sees of the Indians of this area show a contented cheerful smiling people, whereas those of their persecutors are dour, miserable and frustrated - materialism and the Catholic church have a lot to answer for.

The cosmology of the indigenous tribes of this region is a complex integrated system of signs and symbols, largely remembered through myth and stories - these being a means by which the complexity of the spirit world can be remembered.  There is a universally held Creation myth, almost identical to that of the rest of the American indigenous peoples and shared with the Inuit.

There is a universally held belief in Destiny and the Great Work.

The symbolism is extraordinary in that it is almost identical to that which I have compiled for this site.  There are differences, but one can see that they are substitutions.  The indigenous people of South America did not know the Lion, for example, but they had the equivalent symbol in the Jaguar.  I say extraordinary, but it is clear that at one time all shamanic peoples had considerable amounts of contact via out of body experiences, as such it is perhaps less extraordinary than I have indicated.  Maybe what is extraordinary is that it has survived.

The levels and layers are recognised as is the Egg.

Instead of describing all the rest of the concepts - all of which are shared with those on this site, I have used the observations as a means of demonstrating this.