Mudang spiritual experiences – Healing the sick in body and mind 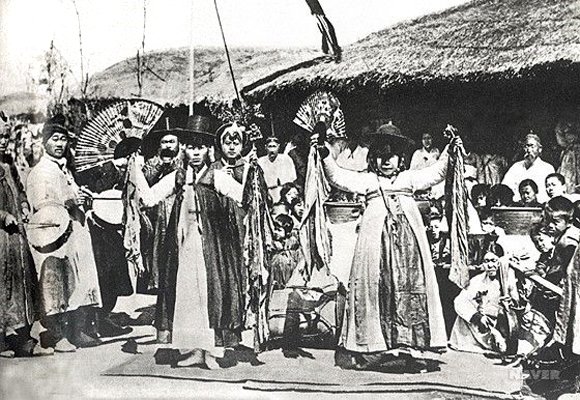 All kut to some extent seek healing. Sometimes, as in a Chejudo Ch'unun-kut, or Dancing Rite, rites of healing are said to involve bizarre phenomena attributed to possession by unsettled, lesser spirits, whose disturbing presence is just as much a concern of the kut community as the presence of the gods. But participants in a Chejudo rite of healing called Nokturi, or Rite for the Soul's Return, take the healing action as the work of the god very much in the same way that Christians take the healing power of the Sacrament of the Sick as the work of Christ.

…In a Nokturi, the shimbang … leads the family of the patient in prayer for healing of body and mind. …., he seeks to drive out spirits that may be provoking illness; and in the case of one suffering from mental stress, he calls back the soul, which is believed to have been lost. He invokes the assistance of the Jade Emperor, the Dragon King of the Sea, and other gods. At the same time, he makes use of water as a sign of life and cleansing.

In the ritual context, the water becomes a sign of the purification and revitalization that both the gods and the family seek for the afflicted person. The shimbang covers the sick person with an article of the person's clothing, the edge of which has been dipped in pure water. He also uses ritual knives to press the seventh vertebrae, where the soul is thought to return. The action accelerates faster and faster to the beat of a drum, and it reaches its climax when the shimbang takes a mouthful of water and sprays it on the patient's head.

The use of cleansing, revitalizing water in such a rite does not of itself assure healing. It simply provides the focus of a magical, sacramental action that embodies the participants' prayer.

A Nokturi was performed in the course of a kut held for an elderly grandmother's deceased husband and other deceased members of the family. The husband had been wounded in the Korean War. He later left his family; and ten years prior to the kut, he had died. The Nokturi was performed for the grandmother's second son, a successful office worker in his mid-thirties with a devoted wife and several children. The son was thought to have lost his soul as a nineteen-year-old student, several years after his father had left home. He had tried to commit suicide and had a free-floating anxiety about robbers. ……, a Nokturi may be performed not only for the person suffering from a readily identifiable "soul loss," but for others present as well. On this occasion, it was also performed for the grandmother herself, who may well have suffered soul loss when her husband died, and for the son's wife and little boy.

The metaphorical expression "soul loss" identifies just as aptly as any scientific psychological term the psychic disturbance that stress can give rise to; and from a psychological point of view, as Kim Kwang-il suggests (1988:131-161), rites of healing, have the potential to serve a useful psychological function, whether or not they do so in actual practice.

Counseling and psychotherapy deal with a person under stress through psycho-analysis, usually on a one-to-one clinical basis; but from a strictly psychological point of view, the non-analytical expression of loving care expressed in a formal ritual action, might be just as sound a way as psycho-analysis to seek lost inner harmony for one suffering from psychic disturbance or depression. Such ritual expression has the advantage of being sanctioned by long tradition and reinforced by the expressed concern of prayerful family members and the believed concern of supernatural powers.

From a religious point of view, healing rites transform the painful disruption of ordinary life that serious illness brings into a time of sacred encounter with the gods and loving concern on the part of family and friends, ancestral spirits, and the gods themselves.

If a Nokturi rite has power to heal, it is not because it involves an extraordinary state of trance or exotic feats on the part of the shimbang. For these are not essential to the rite. It is because the rite gives expression to a sympathy for the pain of others gained from the pain of the shimbang's own initiatory experiences.

As was noted …., the fact that Shamanism is named after the shaman draws undo attention to the person of the shaman. Kut signs are not so much the shaman's signs as the collective work of a believing, praying community. Feats or no feats, healing or no healing, moreover, the Nokturi achieves then and there a re-affirmation of the community's faith in divine providential power.