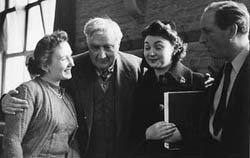 No sad thought his soul affright;
Sleep it is that maketh night;
Let no murmur nor rude wind
To his slumbers prove unkind;
But a quire of angels make
His dreams of heaven, and let him wake
To as many joys as can
In this world befall a man.

Promise fills the sky with light,
Stars and angels dance in flight;
Joy of heaven shall now unbind
Chains of evil from mankind,
Love and joy their power shall break,
And for a new born prince's sake;
Never since the world began
Such a light such dark did span.

XVI. Epilogue
John 1:1-14; John Milton, "Hymn on the Morning of Christ's Nativity"
In the beginning was the Word, and the Word was with God, and the Word was God. In Him was life; and the life was the light of men. And the Word was made flesh, and dwelt among us, full of grace and truth. Emmanuel, God with us.

Ring out, ye crystal spheres,
Once bless our human ears,
If ye have power to touch our senses so;
And let your silver chime
Move in melodious time,
And let the bass of heaven's deep organ blow;
And, with your ninefold harmony,
Make up full consort to the angelic symphony.

Such music (as 'tis said),
Before was never made,
But when of old the sons of the morning sung,
While the Creator great
His constellations set,
And the well-balanced world on hinges hung:
And cast the dark foundations deep,
And bid the weltering waves their oozy channel keep.

Yea, truth and justice then
Will down return to men,
Orbed in a rainbow; and, like glories wearing,
Mercy will sit between,
Throned in celestial sheen,
With radiant feet the tissued cloud down-steering;
And heaven, as at some festival.
Will open wide the gates of her high palace hall.