Reichel-Dolmatoff interpreted all this physically whereas the Indians were speaking entirely spiritually, and because he was a scientist he frequently added his own physical interpretation and comments.  I have removed the interpretation and left the beliefs, which are reasonably well stated.

There is an interesting difference in beliefs here between the Indians and many other cultures - but given Reichel-Dolmatoff's complete lack of understanding, it could also be his interpretation.  Most cultures believe that spirit input is water/feminine, whereas the spirit output from us is smoke/masculine. 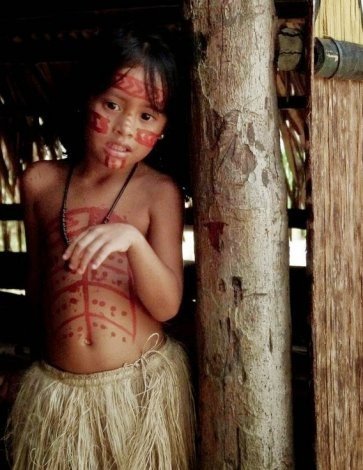 The Creation consists of four fundamental elements that in the innumerable constellations and microcosmic combinations, constitute the basis of the Universe and of the life that animates it: Earth, Water, Air, and Energy [Fire/Aether]. Our world is formed by Earth and Water….

That which is Earth is masculine and that which is Water is feminine. Their dichotomy is essential because it establishes the model for all that is created and will be created.

The coincidence of opposites leads to new creations, or more correctly speaking, to procreations, and these establish new obligations and ties among their components.

Between these two principles, the Air, the great asexual element, expands between, this world and the supernatural world; it is, therefore, the communicating element through which contact is established.

It is the energy of the Sun that makes women conceive and give birth, makes the animals reproduce and the plants grow and causes the fruit to ripen. But other cyclical phenomena are also subject to this power; the movements of the stars, the seasons of the year, the scarcity or abundance of food, and the increase or decrease of physiological human phenomena. So the energy of creation is a masculine power that fertilizes a feminine element that is the world.