Dogon - The Order of creation 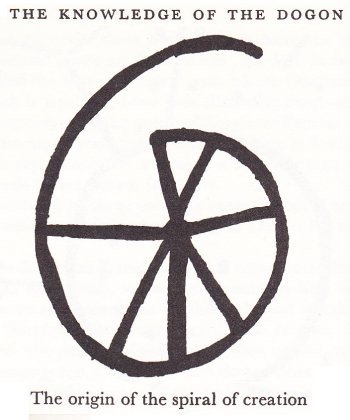 This must not be taken literally, the principles being described are the male and female principle.  Furthermore despite the very careful way in which Marcel Griaule documented what he was told, I think there may have been a small amount of distortion in subsequent translations of the translations, however, the generic principles can be seen clearly

From A Sudanese Sirius System M. GRIAULE and G. DIETERLEN

The eighth Hogon instructed his people in the features of the star, and, more generally, of the Sirius system.  Sirius appears red to the eye, Digitaria white. The latter lies at the origin of things.

'God created Digitaria before any other star'. It is the 'egg of the world', aduno tal, the infinitely tiny and, as it developed, it gave birth to everything that exists, visible or invisible, so It is made up of three of the four basic elements: air, fire and water.

The element earth is replaced by metal. To start with, it was just a seed of Digitaria exilisis po, called euphemistically kize uzi, 'the little thing', consisting of a central nucleus which ejected ever larger seeds or shoots in a conical spiral motion (fig. vi). The first seven seeds or shoots are represented graphically by seven lines, increasing in length, within the sac formed in turn by an oval symbolizing the egg of the world.

The entire work of Digitaria is summarized in a drawing whose various parts are carried out in the following order:

Last, a third shoot, taking the place of the first, gives it the form of an oval which is open in its lower section, and surrounds the base of the vertical segment. The curved form, as opposed to the straight, suggests the transformation and progress of things. The personage thus obtained, called the 'life of the world', is the created being, the agent, the microcosm summarizing the universe.