This is what happens when an academic, who is also a politician, reads something related to spiritual practises of which he is not only not aware, but is unlikely ever to have experienced.

Rebirth is not nice, but it is not literal and Soustelle has made it literal and condemned it in the process.  If you compare the careful way in which comparable experiences were documented by A P Elkin with Australian aborigines, when he not only recorded faithfully what they said, but did not judge, because he clearly knew there was more to it than meets the eye [although he may have had exposure to freemasonry which might have helped] and you realise how much distortion can take place in the hands of the bad academic.

It is like asking someone who has never tasted food to write a cookery book, or a person who has lost their sense of taste to be a restaurant critic.  It cannot be done.

The true meaning is in bold italics 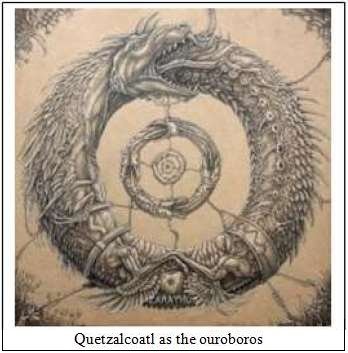 But these were not the only forms of sacrifice. Women were dedicated to the goddesses of the earth, and while they danced, pretending to be unaware of their fate, their heads were struck off [rebirth - beheading] ; children were drowned as an offering to the rain-god Tlaloc [baptism]; the fire-god's victims, anasthetised by yauhtli (hashish), were thrown into the blaze [rebirth - boiled in a cauldron]; and those who personified the god Xipe Totec were fastened to a kind of frame, shot with arrows [like St Sebastion - rebirth pierced with arrows and swords]  and then flayed [rebirth serpent energy kundalini] - the priests dressed themselves in the skin.

In most cases, the victim was dressed, painted and ornamented so as to represent the god who was being worshipped; and thus it was the god himself who died before his own image and in his own temple, just as all the gods had accepted death in the first days for the salvation of the world [salvation and castration]. And when ritual cannibalism was practiced on certain occasions, it was the god's own flesh that the faithful ate in their bloody communion.

There is no aspect of the Mexican civilisation that shocks our feelings as much as this. From the first contact between the Indians and the Europeans the horror and disgust that the newcomers felt for the human sacrifices helped them to convince themselves that the native religion came from hell and that its gods were no more than devils.