The Water King and Vasilissa the Wise

Initiation by an eagle.

Unfortunately I do not know the source

The Water King and Vasilissa the Wise.

Once upon a time there lived a King and Queen, and the King was very fond of hunting and shooting. Well one day he went out hunting, and he saw an Eaglet sitting on an oak. But just as he was going to shoot at it the Eaglet began to entreat him, crying:—

“Don’t shoot me, my lord King! better take me home with you; some time or other I shall be of service to you.”

The King reflected awhile and said, “How can you be of use to me?” and again he was going to shoot.

Then the Eaglet said to him a second time:—

“Don’t shoot me, my lord King! better take me home with you; some time or other I shall be of use to you.”

The King thought and thought, but couldn’t imagine a bit the more what use the Eaglet could be to him, and so he determined to shoot it. Then a third time the Eaglet exclaimed:—

“Don’t shoot me, my lord King! better take me home with you and feed me for three years. Some time or other I shall be of service to you!”

The King relented, took the Eaglet home with him, and fed it for a year, for two years. But it ate so much that it devoured all his cattle. The King had neither a cow nor a sheep left. At length the Eagle said:—

The King set it at liberty; the Eagle began trying its wings. But no, it could not fly yet! So it said:—

“Well, my lord King! you have fed me two years; now, whether you like it or no, feed me for one year more. Even if you have to borrow, at all events feed me; you won’t lose by it!”

Well, this is what the King did. He borrowed cattle from everywhere round about, and he fed the Eagle for the space of a whole year, and afterwards he set it at liberty. The Eagle rose ever so high, flew and flew, then dropt down again to the earth and said:—

“Now then, my lord King! Take a seat on my back! we’ll have a fly together?”

The King got on the Eagle’s back. Away they went flying. Before very long they reached the blue sea. Then the Eagle shook off the King, who fell into the sea, and sank up to his knees. But the Eagle didn’t let him drown! it jerked him on to its wing, and asked:—

“How now, my lord King! were you frightened, perchance?”

“I was,” said the King; “I thought I was going to be drowned outright!”

Again they flew and flew till they reached another sea. The Eagle shook off the King right in the middle of the sea; the King sank up to his girdle. The Eagle jerked him on to its wing again, and asked:—

“Well, my lord King, were you frightened, perchance?”

“I was,” he replied, “but all the time I thought, ‘Perhaps, please God, the creature will pull me out.’”

Away they flew again, flew, and arrived at a third sea. The Eagle dropped the King into a great gulf, so that he sank right  up to his neck. And the third time the Eagle jerked him on to its wing, and asked:—

“Well, my lord King! Were you frightened, perchance?”

“Well, my lord King! now you have felt what the fear of death is like! What I have done was in payment of an old score. Do you remember my sitting on an oak, and your wanting to shoot me? Three times you were going to let fly, but I kept on entreating you not to shoot, saying to myself all the time, ‘Perhaps he won’t kill me; perhaps he’ll relent and take me home with him!’” 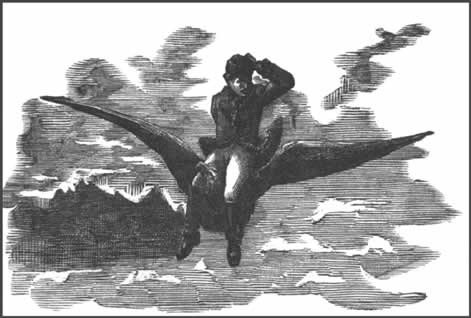 From Russian Fairy Tales, “A CHOICE COLLECTION OF MUSCOVITE FOLK-LORE BY W. R. S. RALSTON, M. A”, - The King got on the Eagle’s back. Away they went flying