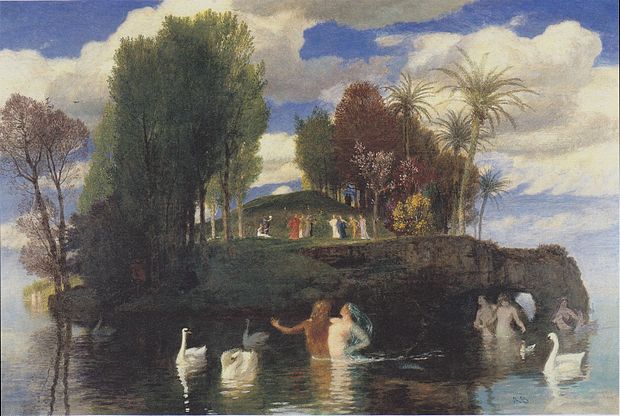 The picture shows an island, with a small hill surrounded by water.  There are numerous trees on the island in the form of a sacred grove.

The swan is perhaps the most important motif in the painting.  A swan is a symbolically very important bird in many cultures.  Its size and strength indicate power and it is white - symbol of the aether level and layer, as such symbolically it is a bird 'of the gods'.  Symbolically a swan person is a pure [white] or saintly soul, a mystic or guru.

The swan can travel metaphorically and literally in the Air and on Water as well as the Earth, so a swan person has advanced spiritual capabilities, is able to travel between and around various spiritual levels.  A swan is thus symbolic of those who are wise and knowledgeable especially of the spiritual world.  There are numerous legends concerning swans who ‘eat pearls’ - partake of spiritual knowledge.

Swans are one of the few birds to have teeth and occasionally this symbolism too is brought into play.  A person being described as a swan is not a meek submissive person.  They may not be very demonstrative in their defensive or attacking role, but they can do both effectively.

But perhaps the most important symbolic attribute of the swan is that they form monogamous pair bonds, so it is a symbol of love.