Hiroshige produced a very famous series of prints entitled famous views in the 60-odd provinces  - which all included views of Mount Fuji.   In the picture we see ‘Mount Fuji seen across a bay’.  This is a symbolic picture.  In the first place the perspective is high, higher than one could ever achieve ‘on foot’.  Implied is the notion of flight and more specifically out of body flight.

In the print Mount Fuji is seen almost from above as if Hiroshige were in an airplane, but this print was produced in 1853, just before the collapse of the culture of spiritual painting, but at its height.

In the foreground he has pine trees – a symbolic tree.  Hiroshige also uses the traditional colour coding of the levels of the spiritual world – implying he saw this as an out of body traveller – there is a dark upper layer [stars],  then the ‘aether' level with its white ranging to red [fire], air and then the ‘water ‘ and earth levels of greens and blues.   Boats appear to ‘fly’ over the water. 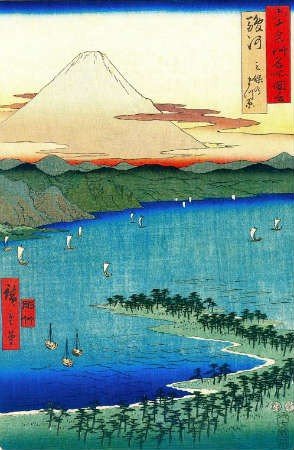