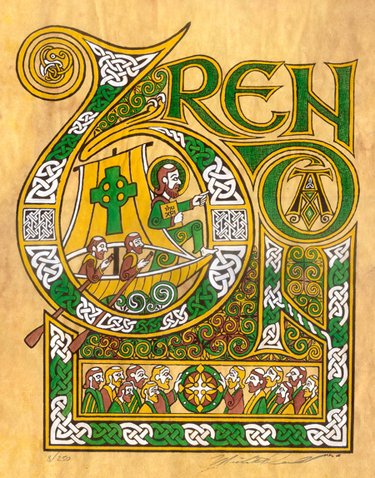 SAINT BRENDAN then embarked, the sail was spread and they began to steer westwards into the summer solstice. They had a favourable wind and, apart from holding the sail, had no need to navigate.

After fifteen days the wind dropped. They set themselves to the oars until their strength failed.

Saint Brendan quickly began to comfort and advise them, saying:

‘Brothers, do not fear.  God is our helper, sailor and helmsman, and he guides us.  Ship all the oars and the rudder.  Just leave the sail spread and God will do as he wishes with his servants and their ship.

They always had their food, however, at evening time. When they got a wind, they did not know from what direction it came or in what direction the boat was going.

When forty days were up and all the victuals had been consumed, an island appeared to them towards the north, rocky and high. When they came near its shore they saw a high cliff like a wall and various streams flowing down from the top of the island into the sea. Nevertheless they failed totally to find a landing-place where they could put in the boat. The brothers were greatly harassed by the lack of food and drink. So each took up a vessel to try to catch some of the fresh water. When Saint Brendan saw this, he said:

'Do not do that. What you are doing is foolish. God does not yet wish to show us a place to land, and do you want to be guilty of plundering? The Lord Jesus Christ after three days will show his servants a landing-place and a place to stay, so that our harassed bodies will be restored.'

When, then, they had circled the island for three days, on the third day about three o'clock they found an opening where one boat might enter. Saint Brendan stood up immediately and blessed the entry. It was a cutting with rock of remarkable height on either side, straight up like a wall. When they had all disembarked and stood outside on land, Saint Brendan forbade them to take any equipment out of the boat. As they were walking along the cliffs of the sea, a dog ran across them on a path and came to the feet of Saint Brendan as dogs usually come to heel to their masters. Saint Brendan said to his brothers:

'Has not God sent us a good messenger? Follow him.'

Saint Brendan and his brothers followed the dog to a town.