Is possession real?  Both Yeats and Mircea Eliade believed it was and was caused by disembodied souls so desperate to experience the sensations of the physical world, they clung on to whoever they could, whoever seemed particularly susceptible,………………

W B Yeats – Anima Mundi
The dead living in their perceptions are, I am persuaded, the source of all that we call instinct, and it is their love and their desire, all unknowing, that make us drive beyond our reason, or in defiance of our interest …. The phantoms are stung to a keener delight from a concord between their luminous pure vehicle and our strong senses

So they are attracted by strong emotion - our perceptions.
But clinging on to a person and ‘possessing them’ are two different things.

Shamanism Archaic Techniques of Ecstasy – Mircea Eliade
And the dead are specially drawn by this mystery of rebirth, of the cycle of creation and of inexhaustible fertility.  Like seeds buried in the womb of the earth, the dead wait for their return to life in their new form. That is why they draw close to the living, particularly at those times when the vital tension of the whole community is at its height, that is during the fertility festival – when the generative powers of nature and of mankind are high….. The souls of the dead thirst for any sort of biological abundance, or organic excess, for any such overflowing of life compensates for the poverty of their own nature and projects them into a swirling flow of potentialities and of the seeds of life….
The Earth Mother or Great Goddess of fertility, governs the fate of seeds and those of the dead in the same way. But the dead are sometimes closer to man and it is to them that the husbandman turns to bless and sustain his work….  Hippocrates tells us that the spirits of the dead make seeds grow and germinate and the author of the Geoponica says that the souls of the dead give life to plants and everything else.

This concept of the unwanted interference – the unwanted control of our composer is true ‘possession’ and it exists.

Mircea Eliade – Shamanism Archaic techniques of ecstasy
Aside from this class of diviners and healers, any person can be possessed by a spirit or the soul of a dead person; when this occurs he speaks in a strange voice and prophesies.  Usually the possession is involuntary.  The man is with his neighbours, discussing one matter or another; suddenly he begins to sneeze and shake ‘His eyes would glare, his limbs twist, his whole body would be convulsed, foam would burst from his lips; then a voice, not his own, would be heard in his throat, allowing or disapproving of what was proposed.  Such a man used no means of bringing on the ghost; it came upon him, as he believed himself, at its own will, its mana overpowered him and when it departed it left him quite exhausted”.
Ref R H Codrington – The Melanesians

If you look at the source section and the history of Edgar Cayce, he was to all intents and purposes possessed.

In the former case, the personality is usually created by the composer as a protection against abuse and in the latter case the personality seems to be almost in opposition to the character of the original person and the addition is more of a ‘take-over’ than a spawning process.

Up to now I have made no mention as to whether the disembodied soul taking possession was living or dead. From many of the examples, the implication is that the person is dead and thus a spirit.

But people who are in an out of body state are also ‘disembodied’.

And there is evidence that those who are capable of practising out of body states but who are not very well practised at controlling them, can inadvertently ‘possess’ the bodies of others.

Possession cases are actually few and far between, but in my view the pattern with which they develop in every case, a pattern which no person could possibly ‘fake’, provides very solid evidence that possession is a very real phenomenon.

It appears to occur to people who are in some way ill and incapacitated, thus they are not only weakened physically by an illness but mentally weakened too.  The possession can be undoubtedly deliberate, by a soul seeking a body, but it also appears to be an unfortunate side effect of novice out of body fliers – although it is clear that the difference is one of the time possessed.

When people say ‘I don’t know what got into me’ if they do something out of character.  They could be right! 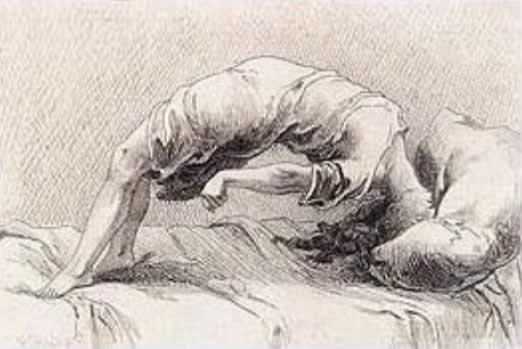