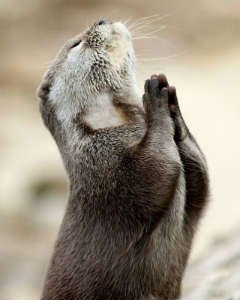 A prayer is not a spell nor a charm nor an incantation. A spell directly invokes a function of the universe.  A prayer is a request to have a function invoked. It is one step away from actual invocation.

Let us imagine we are standing in a street and we see a little dog. We would like to see the little dog wag its tail.  A spell would cause the dog to way its tail – one of its functions ‘tail wagging’ is invoked directly.

All prayers are handled by our own composer. The composer – our Higher spirit is aware of course of what our Conscious mind is thinking via our Perceptions, thus prayers reach the Composer via the Perceptions.

What the Higher spirit does with the prayer depends a great deal on whether it believes the prayer to be helpful to our destiny and well being.

If it is helpful we may get our prayers answered as the Composer co-operates with other composers to make it happen.

If the wish is unhelpful then nothing will happen. Of course we may get our wish granted by sheer chance, but this has nothing to do with the spirit world.

There is also a connection between prayers and prophecy.

Let us suppose that a person makes a strong prophecy. “On such and such a date this ‘event’ will happen”.  By thinking this or saying it, a record has been made in their perceptions – a never to be erased record.

Our perceptions enter the area of the cones rise through the vibrational levels and are used by Intelligences and spirit guides in the aether level to monitor what is happening.  This is shown diagrammatically below – the perceptions – shown as a pink tube or tunnel exit through the narrow portal [over the bridge] that leads into the Aether level.

BUT, as you can see from the diagram those perceptions are available for anyone to explore, with the permission of the composers to which they belong.  A prophecy by its very nature is there for anyone to read – access is uncontrolled and universally available.  So is a prayer and a prayer and a prophecy are much the same in their effect.  A prayer is what we would like to happen, and very often a prophecy is what we would in our hearts like to happen.

These prayers or WISHES or prophecies, are thus available as a sort of ‘hanging goal’ – if I now redraw the diagram we can think of them almost like a series of little balloons or clouds hanging there in the spirit world at various levels, waiting for something to happen.

Our composers are in this spirit world and free to search around at any time. There is no restrictions on the composer, as such it will be aware of what is going on around it all the time.

Let us now suppose that one wish – seems to resonate with a number of composers.  That there appears to be a match of wishes that all seem to be wanting the same thing or maybe simply a wish that other composers can feel some sympathy towards. Without us – our Conscious selves being aware of it, Inter composer communication takes place between all those composers wanting the same thing and all those wishing to make it happen and the prophecy - the wish - becomes a reality.  People may act and do things without particularly knowing why, but their composers are actually manipulating them like a puppet on a string, to make this thing they wanted come true.

The stronger the wish, the more people resonate around this wish the more likely it is to happen.  But we, in a sense make it happen, by our joint efforts, remembering of course that a lot of things have composers, not just people.

And this is the Power of Prayer and this is what is called a Self fulfilling prophecy.