This is exceptionally difficult to explain, it can only be really understood if you understand the symbolism of ecstasy, and the masculine and feminine.  The Divine Presence is the Higher spirit.  The journey is the spiritual journey, but there is a literal side which does not clash with the symbolic in that true love and making love are one route to ecstasy.

Taking the literal, for the moment, it should be noted that making love and all forms of love making are supported "this pleasure is a religious one, giving joy also to the Divine Presence, and it is an instrument for peace in the world" ... and " It may be questioned, is it a sin if he fails to go in to his wife? It is a sin, for in his failure, he detracts from the honour of the heavenly mate who was given him by reason of his wife".

The figurative side is embodied in the symbolism of the bride bridegroom and the lovers.

Below Marc Chagal - Lovers in red in the sky 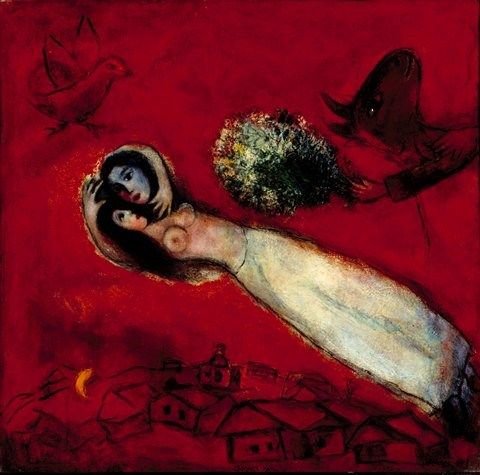 Zohar I 49b [translated by Gershom Scholem] – Masculine and Feminine

It behooves a man to be ‘male and female’, always, so that his faith may remain stable, and in order that the Presence may never leave him. You will ask:  How with the man who makes a journey, and away from his wife, ceases to be "male and female”?

Such a one, before starting, and while he is still “male and female”, must pray to God, to draw unto himself the presence of his Master.  After he has prayed and offered thanksgiving, and when the Presence is resting on him, then he may go for by virtue of his union with the Presence he is now male and female in the country, just as he was male and female in the town, for it is written: "Righteousness {zedek, feminine of Zaddik} shall go before him and shall make his footsteps a way" {Psalms 85:14).

Remark this. The whole time of his traveling a man should heed well his actions, lest the holy union break off, and he be left imperfect, deprived of the union with the female. If it was needful when he and his wife were together, how much greater the need when the heavenly mate is with him? And the more so, indeed, since this heavenly union acts as his constant guard on his journey, until his return home.

Moreover, it is his duty, once back home, to give his wife pleasure, inasmuch as she it was who obtained for him the heavenly union.

There is twofold reason for this duty of cohabitation.

First, this pleasure is a religious one, giving joy also to the Divine Presence, and it is an instrument for peace in the world, as it stands written, "and thou shalt know that thy tent is in peace; and thou shalt visit thy habitation and not sin"  {Job 5:24}.  It may be questioned, is it a sin if he fails to go in to his wife? It is a sin, for in his failure, he detracts from the honour of the heavenly mate who was given him by reason of his wife.

Secondly, if his wife should conceive, the heavenly partner bestows upon the child a holy soul; for this covenant is called the covenant of the Holy One, be blessed.

Bride and bridegroom
Children
Lovers, the
Masculine and feminine
Tent