"from Dictionary of Symbols  - C E Cirlot The Sun - The nineteenth enigma of the Tarot pack.  The allegory shows the disk of the astral king surrounded by alternating straight and flamelike rays, golden and red, symbolising the twofold activity of the sun in giving out warmth and light.  Beneath the Sun, from which a golden spray is falling, are a young couple in a green field and in the background there is a wall"

Another interpretation of the shape of the rays to that given by Cirlot is that they symbolise both creation and destruction.

The first cards show a boy and a girl and in all three of the cards a wall.  Two have golden drops falling from or rising to the sun, one has golden rays and is more like a path.

The green field is symbolic of earth, again these pair are living physically on earth.  The wall is the divider between those in the highest spiritual ream  and the rest of the spiritual realm.  The boy and the girl are I think the Prince and the Princess – trainee spiritual path travellers – setting off on their journey.  They are shown young and innocent to show it is a journey for the ‘pure in heart’.

‘Blessed are the pure in heart for they shall see the kingdom of God’.
Although the drops appear to be falling, as in birth I think in this particular case, the symbolism shows instead that the drops are rising towards the sun – another allegorical reference to the spiritual path which seeks to merge with the Creator.

The spiritual path to the sun [creator] is usually shown in red.  In some tarots it appears more like a portal going upwards to the sun rather than a path – a flag or banner, but we see other examples below  where there is very definite use of a flag. 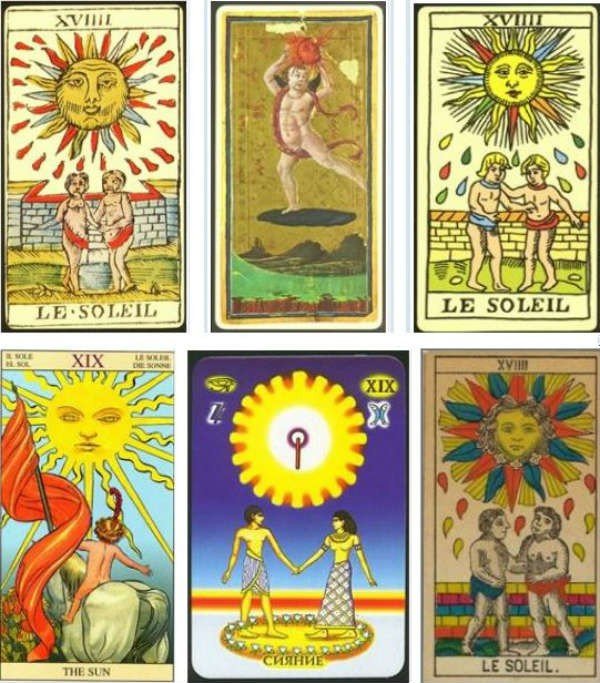