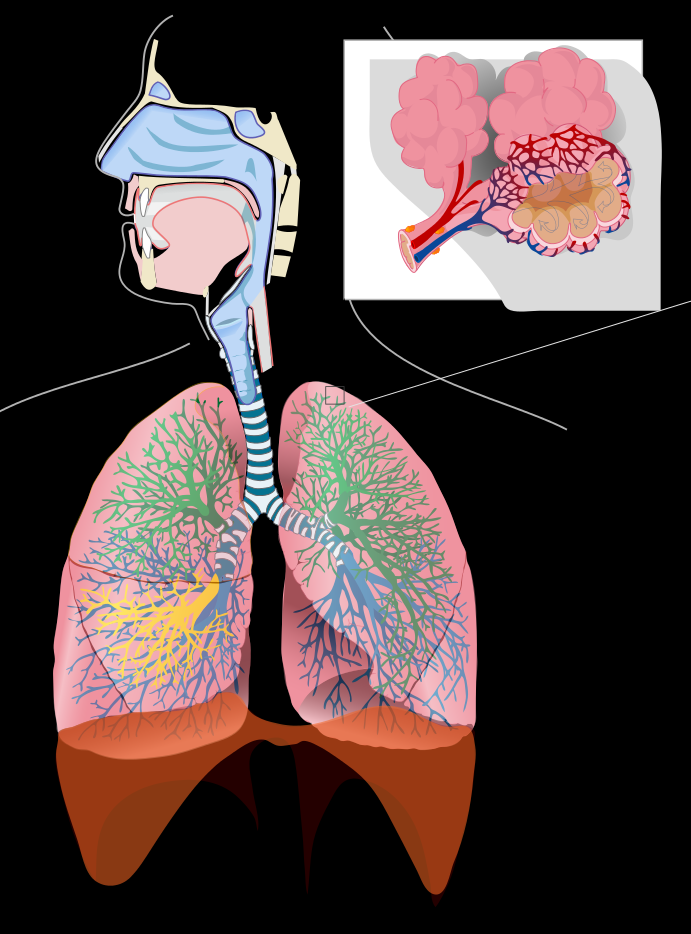 The lungs are the primary organs of respiration in humans and many other animal.

In mammals and most other vertebrates, two lungs are located near the backbone on either side of the heart. Their function in the respiratory system is to extract oxygen from the atmosphere and transfer it into the bloodstream, and to release carbon dioxide from the bloodstream into the atmosphere, in a process of gas exchange.

Respiration is driven by different muscular systems.  In other words the lung is also a muscular organ, like the heart.

The lung, just like the intestine is colonised by a biome of bacteria and other microbes.  In other words, there is a lung flora, that helps the immune system fight invaders.

Microbes are readily cultured from epithelial surfaces of the skin, mouth, and colon. In the last 10 years, culture-independent DNA-based techniques demonstrated that much more complex microbial communities reside on most epithelial surfaces; this includes the lower airways, where bacterial culture had failed to reliably demonstrate resident bacteria.
Exposure to a diverse bacterial environment is important for adequate immunological development. The most common microbes found in the lower airways are also found in the upper airways.
Increasing abundance of oral characteristic taxa is associated with increased inflammatory cells and exhaled nitric oxide, suggesting that the airway microbiome induces an immunological response in the lung. Furthermore, rhinovirus infection leads to outgrowth of Haemophilus in patients with chronic obstructive pulmonary disease, and human immunodeficiency virus-infected subjects have more Tropheryma whipplei in the lower airway, suggesting a bidirectional interaction in which the host immune defenses also influence the microbial niche.
Quantitative and/or qualitative changes in the lung microbiome may be relevant for disease progression and exacerbations in a number of pulmonary diseases.  PMID:  24460444

Diseases of the lung

The term lung disease is used to group a large number of diseases and illnesses of the lungs, both those which result in inflammation and those that result in damage.

Both the detailed description and observations for some of these illnesses are provided in separate sections, but there are some which are described in the science section, but whose observations appear here.

The main differences between all these diseases is which specific parts of the lung are damaged, and whether the damage is permanent or temporary.  The causes are much the same in each case and the effects are also somewhat similar.  Some can lead on to others.  In some ways unnecessary complexity has been introduced by inventing so many names.  They are all lung disease in the end analysis.

The causes of lung disease in summary can be

- see both Hypoxia and Hypoxia side-effects

A number of pharmaceuticals are known to cause shortness of breath, wheeziness and general difficulty in breathing. For example ACE Inhibitors.  This LINK takes you to a list of those which are classified as causing respiratory tract congestion problems in general.  As of December 2016, about 700 pharmaceuticals were implicated.  Please note that if the link does not work, you can use the symptom table on this site to find this condition, scroll down to the 'drugs that cause' and obtain the table from there.  We have had problems with broken links with this site, as such the link may not work in the future.

The chart below shows the trend [not absolute numbers] of the number of adverse drug reports being submitted by doctors, in effect the increase of respiratory problems being caused by doctor prescribed drugs.

Each entry for the diseases shows the bacteria involved, but it is worth mentionning that there are 'good' and 'bad' bacteria in the lung, just as there is a complex flora in the intestine, and the use of antibiotics may be extremely unwise, as it may kill off the good and the bad bacteria.  A person with a bacterial infection needs to be helped to boost their immune system for as long as possible, sleeping, rest, lots of vitamin and mineral packed food, music, love, removal from stress.

Numerous lines of evidence, ranging from recent studies back to those in the 1920s, have demonstrated that the lungs are NOT bacteria-free during health. We have recently proposed that the entire respiratory tract should be considered a single ecosystem extending from the nasal and oral cavities to the alveoli, which includes gradients and niches that modulate microbiome dispersion, retention, survival and proliferation.
Bacterial exposure and colonization of the lungs during health is most likely constant and transient, respectively.
Host microanatomy, cell biology and innate defenses are altered during chronic lung disease, which in turn, alters the dynamics of bacterial turnover in the lungs and can lead to longer term bacterial colonization, as well as blooms of well-recognized respiratory bacterial pathogens.
A few new respiratory colonizers have been identified by culture-independent methods, such as Pseudomonas fluorescens; however, the role of these bacteria in respiratory disease remains to be determined.  PMID:  26122174

so early days, but very promising research is being undertaken.

Numerous viruses can cause permanent damage to the lungs, each entry gives you a list of the culprits.  For example
“Case 2 (W.B.): A 69 year old white male had been in good health until five years prior to treatment, when he had a fairly severe attack of influenza, following which there developed severe exertional dyspnea, accompanied by a productive cough. ...Dyspnea increased to the point of complete incapacitation. It became impossible for him to stand and talk without marked discomfort. During the eight years he suffered from dyspnea and marked limitation of activity, he always obtained some relief while lying flat, especially if the feet were elevated.[Furman and Callaway Dis Chest 1950;18;232-243]

Toxins such as pesticides, smoke, air pollution, fumes, smog, household chemicals, air fresheners, and so on are known irritants and cause inflammation. Nanoparticles are now a toxin of particular concern with a proven scientific link to severe pulmonary distress.  Heavy metals also cause problems

Pulmonary inflammation, especially persistent inflammation, has been found to play a key role in respiratory disorders induced by nanoparticles ..... In inhalation studies and instillation studies of nanomaterials, persistent inflammation is composed of neutrophils and alveolar macrophages,...Chemical and physical damage are associated with point mutation by free radicals and double strand brake, respectively. The failure of DNA repair and accumulation of mutations might occur when inflammation is prolonged, and finally normal cells could become malignant. These free radicals can not only damage cells but also induce signaling molecules containing immunoreaction. Nanoparticles and asbestos also induce the production of free radicals. ... Taken together, the presence of persistent inflammation may contribute to the pathogenesis of a variety of diseases induced by nanomaterials.  PMID: 25097864

and chest trauma and damage

The species Chlamydia pneumoniae …. can cause severe respiratory disease and pneumonia and has been linked to chronic diseases such as asthma, atherosclerosis and even Alzheimer's. ... It is emerging that C. pneumoniae's ability to survive inside its target cells, including evasion of the host's immune attack mechanisms, is linked to the acquisition of the key metabolites Tryptophan and arginine. When C. pneumoniae senses host immune attack, it responds by rapidly reverting to a persistent phase. During persistence, they reduce their metabolic levels, halting progression of their developmental cycle, waiting until the hostile external conditions have passed before they re-emerge.PMID: 24682324

But another major category of parasite known to cause lung disease is the mite.

In addition to asthma, COPD can also be caused by mites in the same way it causes asthma – by inhalation of the pathogens attracted by the faeces.  In effect, this is more correctly a pathogen attack via the bacteria, viruses and fungi attracted to the faeces rather than a direct reaction to the mite.  In one study of people with COPD the prevalence of sensitivity to mites was nearly 50% of the people tested.

But in addition to the pathogens the mites carry and transmit, it appears that mites can also colonise the lung

… human acariasis, [is caused when] mites invade and parasitize the human body in various tissues from the gastrointestinal tract to the lung. Here, we summarize the reported cases of human acariasis of pulmonary, intestinal, oral (anaphylaxis), urinary, otic, and vaginal systems. Because the clinical symptoms of acariasis often overlap with other disease symptoms leading to frequent misdiagnosis, we highlight the need for more attention on these infections. PMID:  25175486

Mold Endangers Children’s Health  Mother’s Dream by Beverly Ford
When Michelle Harless finally scraped up the money for her first house, she thought she was prepared for the rigors of home ownership. But within months, her Glendale dream home became her worst nightmare. The stuff of that nightmare: mold fed by a leaky pipe.  Four months after moving into the three-bedroom house, Harless’s 7-year-old son, Thomas Fuller, who suffers from cystic fibrosis, had to be hospitalized. Two months later, he was hospitalized again. Doctors said Thomas had lost 33 percent of his lung function because of a common but sometimes toxic mold, called aspergillus.  ...Her 2-year-old son, James Hatley, wasn’t immune, either. He lost his appetite, developed red, cracked skin and began coughing and sniffling.

- and deprivation that occurs both during gestation and after gestation.  For example, there is a link between Vitamin D deficiency and a number of lung diseases including asthma.

This study supports the notion that vitamin D deficiency during lung development may impact on post-natal lung growth and increase the risk of developing lung disease.PMID: 24601713

there are, however, other studies that show that nutritional deprivation in general is a problem.

Find the cause.  See also Healing yourself

If the cause is the parasite Chlamydia, for example, then it would help to reduce intake of arginine and tryptophan for a short period until it was eradicated.

In other words, there is no 'standard' treatment, the treatment can only be stated once the cause is found.  It has to be pathogen specific.

If the doctor prescribes you immunosuppressants or inhalers or similar symptom masking pharmaceuticals, then all he is doing is allowing the pathogen to progress at greater speed and you will never be cured.

Physically -  the reason for the spiritual experiences is hypoxia.

Logically - It may be helpful now to refer to the Model of the Mind and to have read the generic description of How spiritual experience works.