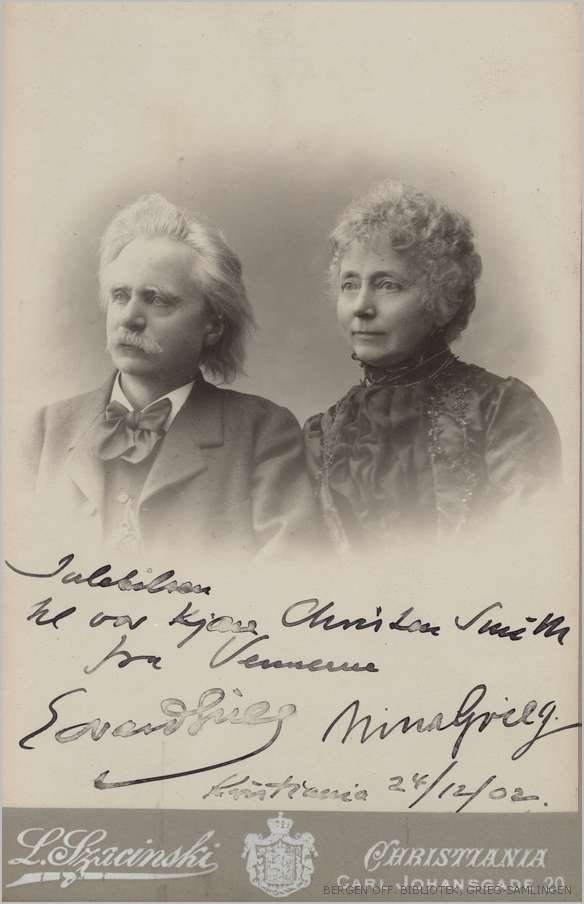 In Copenhagen, Grieg fell in love with the woman who would become his wife—his cousin, Nina Hagerup. Nina’s parents did not approve of the engagement and complained that Grieg’s chosen occupation could not offer their daughter a secure life. Nina’s mother strongly opposed the engagement saying, “He is nothing and he has nothing and he writes music that nobody wants to hear.” The couple waited for an entire year before Nina’s parents would permit the engagement to be announced publically. A three-year engagement led to a small but beautiful wedding in 1867. Neither set of parents were in attendance at the ceremony or following festivities (Benestad 7)

During their engagement, Grieg wrote about Nina in his diary almost every day and wrote letters to her almost as often. In his 1865 diary, he writes:

“Oh, my Nina! If you knew with what tenderness my thoughts here dwell on you, with what endless longing I here think of you! Before I fathomed you and all your love, it was as if I did not dare aspire toward the heights…It is because of you, my beloved, that with confidence and clarity I dare cast a glance toward the infinite. It is as if you, my good angel, hovered beside me as my thoughts wander through the vastness of space—as if through your intercession I received the power to break the magnetic chain that binds me to the dust! May God shed His peace upon you if you are suffering during these days—you who are my treasure, the light of my life!” (Grieg Diary of 1865, qtd in Grieg’s Diaries, Articles, and Speeches 7)

“Jeg elsker dig” (more commonly known as “Ich liebe dich,”or “I love you,”) is one of Grieg’s most popular songs and is believed to have been an engagement gift to Nina, who was herself a talented soprano. She sang every one of his songs, and Grieg called her the “only true interpreter of… [his] songs (Grieg Diary of 1905).” This song is in every way “Romantic”— both in compositional style and in mood. Listen for Grieg’s well-developed harmonic structures and chromaticism.