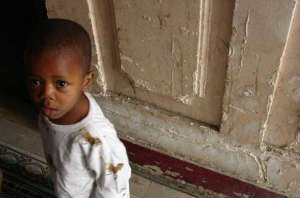 Lead poisoning is caused when the heavy metal lead enters the body. It can be accidentally ingested, but it can, as organic lead compounds, cross the skin and respiratory tract easily. Thus there are multiple routes of exposure.

Lead has no known physiologically relevant role in the body, and its harmful effects are myriad.  Lead is extremely toxic at any level and interferes with the heart, bones, intestines, kidneys, and reproductive and nervous systems. It can also enter the brain via the spinal cord and affect the organs of the brain.

It is removed from the body very very slowly, mainly through urine. Smaller amounts of lead are also eliminated through the faeces, and very small amounts in hair, nails, and sweat.

Lead poisoning is one of the oldest known work and environmental hazards, the modern understanding of the small amount of lead necessary to cause harm did not come about until the latter half of the 20th century. But its harmful effects have been known for thousands of years.  In the 2nd century BC the Greek botanist Nicander described the colic and paralysis seen in lead-poisoned people. Dioscorides, a Greek physician who lived in the 1st century CE, wrote that lead makes the mind "give way".

No safe threshold for lead exposure has been discovered—that is, there is no known amount of lead that is too small to cause the body harm.

Lead is one of the largest environmental medical problems the world faces in terms of the numbers of people exposed and the public health toll it takes. Lead exposure accounts for about 0.2% of all deaths and 0.6% of disability adjusted life years globally, but this figure is probably a very conservative estimate.

Of North American children, 7% have unacceptable levels of lead in their blood.  Among Central and South American children, the percentage is 33 to 34%. About one fifth of the world's disease burden from lead poisoning occurs in the Western Pacific, and another fifth is in Southeast Asia.

“Recommendations by health professionals for lowering childhood exposures include banning the use of lead where it is not essential [sic!] and strengthening regulations that limit the amount of lead in soil, water, air, household dust, and products”.

How can anything this poisonous be called ‘essential’?  All heavy metals cause horrendous health problems, but lead has a terrible history.  I’m afraid I find it extraordinary that it hasn’t been banned entirely years and years ago. 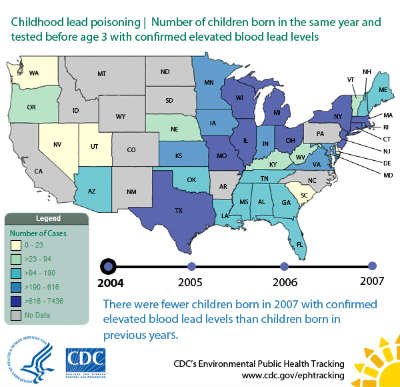 Lead poisoning creeps up on you.  If the exposure is small there is a correspondingly slow development of symptoms such that people may not notice anything happening.  Symptoms may develop over weeks to months or it may take years, as the lead gradually accumulates in the body.  Symptoms from exposure to organic lead, which is more toxic than inorganic lead due to its lipid solubility, occur more rapidly.  Symptoms include 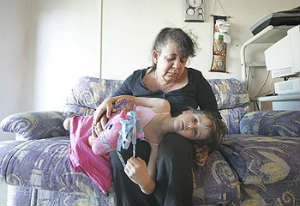 As a consequence of this, one can then get Behavioural problems [including violent aggressive behaviour] - Lead exposure is correlated with neuropsychiatric disorders such as attention deficit hyperactivity disorder and antisocial behaviour. Elevated lead levels in children [and adults] are correlated with higher scores on aggression and delinquency measures.  A correlation has also been found between lead exposure and violent crime. There also seems to be a link with lead and violent nations.

Countries with the highest air lead levels have been found to have the highest murder rates, after adjusting for confounding factors.  A May 2000 study by economic consultant Rick Nevin theorizes that lead exposure explains 65% to 90% of the variation in violent crime rates in the US.

Effects of lead on the physiology of the kidneys and blood are generally reversible; its effects on the central nervous system are not.

The only known treatment is chelation therapy.  The chelating agents used for treatment of severe lead poisoning are edetate disodium calcium (CaNa2EDTA), dimercaprol (BAL), which are injected, and succimer and d-penicillamine, which are administered orally.  Chelation therapy only lowers blood lead levels and may not prevent the lead-induced cognitive problems associated with lower lead levels in tissue. Chelating agents can also have adverse effects for example, chelation therapy can lower the body's levels of necessary nutrients like zinc.

Some more suggestions are provided in the observations.

In the past, the main causes were

‘Many secret remedies contained little more than a few vegetable extracts, but others did contain active constituents that might include opium or heavy metals such as mercury, lead, antimony or arsenic which were variously used for treating coughs, colds, consumption,  venereal and skin diseases” [from Making Medicines: A Brief History Of Pharmacy And Pharmaceuticals - Stuart Anderson] 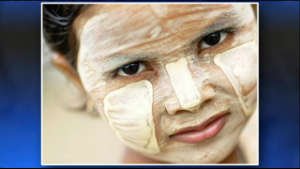 These days the causes may be 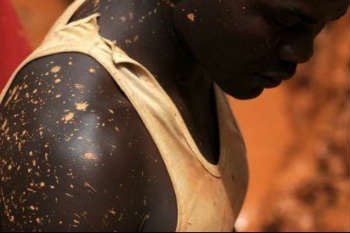 Other lead-containing products; these include 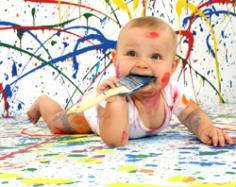 As early as 1713, Bernardino Ramazzini, the "patron saint" of occupational medicine, described in his classic book, De Morbis Artificum (Diseases of Workers), the hazards of materials to which painters are exposed. He wrote:

“I have observed that nearly all the painters whom I know, both in this and other cities, are sickly; and if one reads the lives of painters it will be seen that they are by no means long-lived, especially those who were the most distinguished”

Some artists pigments are lead based and contain high quantites of lead.  It was probably worse in olden days  if you mixed your own paints, as the dust could be more easily inhaled or absorbed via the skin.  The painter Caravaggio is said to have died of lead poisoning. Caravaggio is known to have indulged in violent behavior, a symptom of lead poisoning.

In art, white lead paint is known as "flake white" or "Cremnitz white". It is valued for the ease of handling and resilience the lead confers to oil paints. Lead-based white is one of the oldest manufactured pigments and is used in the manufacture of a number of other pigments.   Chrome Yellow is also a natural yellow pigment made of lead(II) chromate (PbCrO4).

Other lead pigments include cremnitz white, Naples yellow and red lead.  There is a separate section dealing with mercury poisoning, but it is worth adding here I think that the pigment Vermilion is a toxic mercury compound favored for its deep red-orange color by many old master painters such as Titian.

I think we underestimate the effect lead and mercury poisoning probably had on artists in the past.

Many of the most famous artists working in France late in the 19th century suffered serious eye diseases. - Monet, Cassatt, Degas, and Pissarro being just four.

“The painters Rubens, Renoir, and Dufy suffered from rheumatoid arthritis and Klee from scleroderma. Analysis of the areas of various colours in randomly selected paintings by these four artists and by eight "controls" (contemporary painters without rheumatic disease) suggests that Rubens, Renoir, Dufy, and Klee used significantly more bright and clear colours based on toxic heavy metals and fewer earth colours containing harmless iron and carbon compounds. These four painters may have been heavily exposed to mercury sulphide, cadmium sulphide, arsenic sulphide, lead, antimony, tin, cobalt, manganese, and chromium, the metals of the bright and clear colours, and exposure to these metals may be of importance in the development of inflammatory rheumatic diseases. Artists today are not so exposed, but heavy metal contamination in food and drinking water exists and experience from the occupational exposure of old masters is still relevant” [source Rheumatic disease, heavy-metal pigments, and the Great Masters - Pedersen LM, Permin H  - Department of Infectious Diseases, Rigshospitalet, Copenhagen, Denmark. PMID: 2897527] 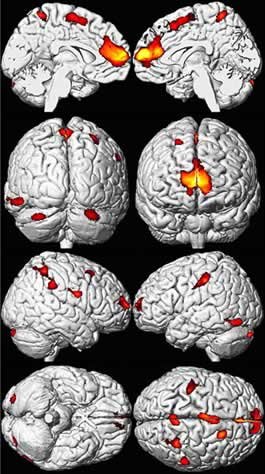 The picture to the right from Wikipedia shows areas of damage in brains exposed to lead.

“The brains of adults who were exposed to lead as children show decreased volume, especially in the prefrontal cortex, on MRI. Areas of volume loss are shown in color over a template of a normal brain”

There are numerous papers on PubMed which show the effects and continued prevalence of lead poisoning  - literally thousands and thousands.  Furthermore many of them show how even today the sources of lead poisoning are not understood, for example: