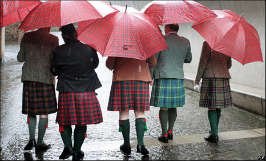 A totem group of people is usually a group of people, whether ancestors long dead or family who are living, who are related genetically. The equivalent in Scotland is the Clan.  The name is most frequently used in hunter gatherer communities. Our word "totem" is thought to derive from the Ojibwe word odoodem, meaning "kinship group".

The group of Higher spirits, departed or still living, forms a collective consciousness with more power as a group than it has individually. If a shaman is able to access this collective consciousness as opposed to just his own memory and knowledge he is able to tap into accumulated wisdom – he becomes wiser. In the days before reading, writing and written records, this form of collective knowledge was especially important as it bestowed wisdom unavailable from any other source. It could be argued that it is still exceptionally important, as it is likely to be closer to the Truth – Reality.

Totem groups are still a very prominent feature of Native American Indian society, Australian aboriginal society, African society and South American Indian society.  It was also a very important part of the belief system of prehistoric European hunter gatherer groups.  The concept of the totem is thus widespread and a surprisingly large number of common beliefs are shared across these societies in various parts of the world.

Many totem groups in indigenous societies are named after an animal or a plant, fish, bird etc.  This has a number of uses.

It helps to a certain extent in conservation of animals and the environment, as in many hunter gatherer societies there was a rule that one should not kill the animal that is your totem animal.

By extension, the same taboo was applied to members of the clan/totem group, as such it might be thought of the very first instance of the biblical commandment ‘thou shalt not kill’ – albeit only with respect to your clan group.

The totem pole of Native American Indians is a symbol of the clan – the totem group.  Totem poles were used as symbols primarily by cultures of the Indigenous peoples of the Pacific Northwest Coast of North America. The totem poles we see nowadays are monumental sculptures carved from large trees, usually cedar, but mostly Western Redcedar, but originally totem poles were smaller and used as  house posts, funerary and memorial markers as symbols of clan. The carvings on the totem poles are there to act as a sort of aide memoir for legends or myths, clan lineages, notable events, cultural beliefs, leaders or other important clan figures, and to represent shamanic powers.