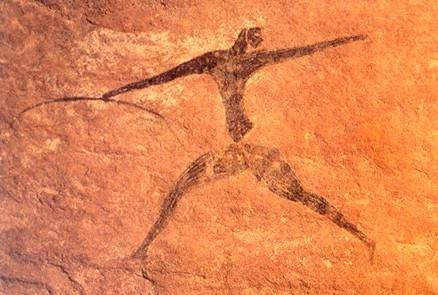 The following story appears to be a truly bizarre one about a lizard that cuts himself up to feed his family.  But this story was a myth telling the creation story and the lizard was an animal person of the old race – in effect a ‘god’.

Rebirth - as a description of a rebirth experience it is a classic portrayal.  A person who has been through this becomes a sort of 'god' in the making within shamanic societies and a co-creator figure. It includes the concept of having to go through a whirlwind  .  Whirlwinds in /Xam mythology were always connected in story telling with supernatural events and have the normal symbolic meaning.    It also involves him having to go up a 'mountain'.  The story also mentions a ‘net’ the gathering of the flesh into a net.

Creation myth - It is a most effective allegory of how species are created as well as how they are propagated.  His wife cuts up the flesh into slices – in effect the ‘implementation activity’ distributes the software of each species to the physical children that have been created.

The lizard in effect sacrifices his chance to be physical by creating other species or creations from himself which themselves become physical – meat to feed a family.  The symbolism appears obscure into you realise that the character is spiritual.

The story ties in extremely well with other creation stories involving sacrifice of some kind – the sacrifice that a co-creator makes when it creates sub-species from itself.  Again, once a species has created sub-species it cannot become physical, so in effect, sacrifices its own body to create its children [to ‘feed’ its children]

note; In this way, in many other cultures,  myths not understood led to literal interpretation and  eventually the use of real sacrifice to celebrate the event.  And thousands of innocent animals, children and adults died as a result.

This thankfully never occurred in /Xam culture, as the original meaning appears not to have been lost.

The First Bushman’s Path:  stories, Songs and testimonies of the /Xam of the Northern Cape

The !khau who was a lizard who was a hunter
And he climbed up the mountain and he sat looking around

He sat waiting, he sat looking for a whirlwind
And when the whirlwind came, he saw it, he rose up and exclaimed

And he packed it up, he packed up his flesh in a net
And he placed his head on the top of the flesh that he packed

And he carried it home, carrying it he returned home
He brought home his own flesh as food

‘this flesh is surely the flesh of a quagga’ his wife said
for the !khau’s cut off head resembled the head of a quagga
and she took the meat out of the net and she cut it into slices