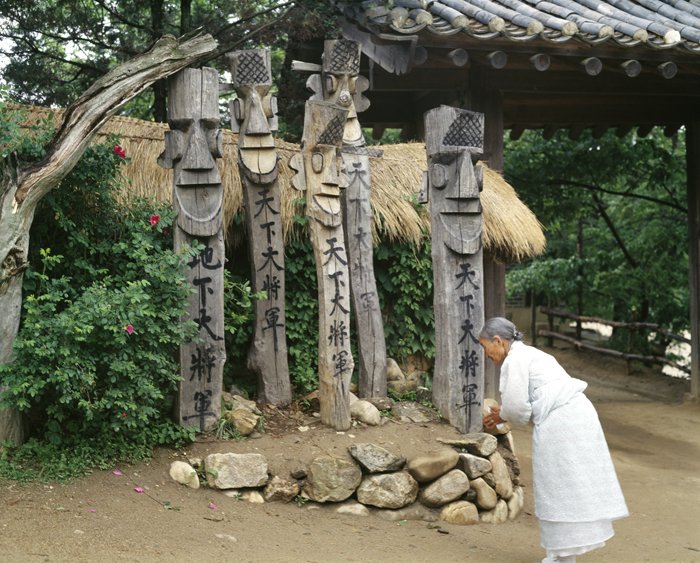 ….. when a god appears, it is believed that the god comes down vertically to the holy place.

Therefore in a shindang (village altar) a "god tree (holy tree)," a "god pillar”' or a "designated rock" is necessary as it is believed to be a "pivot" that connects the World-on-the-surface-of-the-earth with the world-above-the-sky, to make the gods' descent and ascent easier.

This is a major distinction between Korean Muism and Siberian Shamans: Quite contrary to Korean Muism where gods descend to the mudang, in Siberia the shaman's soul ascends to heaven to be united with gods.

In Siberia, as the first step toward becoming a Shaman through initiation, a shaman of a primitive tribe climbs up a tree and his soul rises to the heavens through a cosmic axis. This is true of the soul-loss type of shaman in Siberia and the possession type of Shaman like mudangs in Korea: the gods come from outside and contact the mu.

Hence, a god-tree, an outstanding rock, or a shin'gan, as a symbol of the cosmic axis for the gods' descent, is treated as holy and sometimes symbolizes the actual physical existence of a god.

High mountains, enormous trees, and a huge shin'gan (God Pillars) are considered particularly holy; therefore the surrounding area of these huge natural things become the place for che (the religious ceremony) in a holy region. If one must perform che in a place without a mountain or trees, a huge shin'gan is built, to create a "temporary holy region.

In ceremonies of sesummu, a shin'gan (a “god-pillar,” which signified a "passageway for god") is an essential condition that has to be installed in the ceremony site.

are all large shin'gan that are installed at the site of the ceremony. However, these large shin'gans are not used or have been simplified in kut performed by kangshinmu in the central and northern regions.

While it may have at times been believed that since kangshinmu received spirit freely, shin'gan (which signifies a passageway for god), symbolizing a spiritual site endowed with spiritual power, is not needed in the ceremony-even if there had been any, it must have dissipated gradually. But generally it was thought that erecting a large shin'gan is necessary as it symbolizes god's passageway. This has developed and purposefully remained because receiving "spirit" is difficult in sesummu.