The spiral is a common symbolic motif and  Cherry trees are symbols of the ‘floating world’ – the land of spirit.

An alternative translation of ‘tea house’ which is actually the word ‘sukiya’ is ‘pleasure-house’ and can also mean ‘place of emptiness’ – the void – the beyond.  So place of spiritual experience.

Clans are important in all shamanic tradition, as it was generally believed that shamanic capabilities were inherited, so you were more likely to go to your clan’s ‘tea house’ than that of another clan.

Aprons are used in Freemasonry. 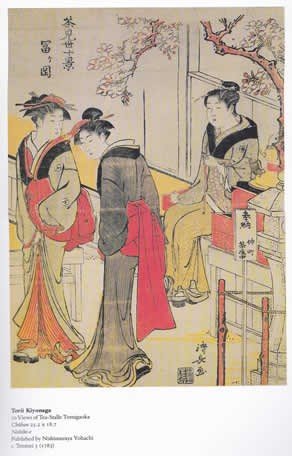 During the  Edo period, visiting shrines and temples was a popular activity. Outside their precincts, as well as at well-known beauty spots, tea-stalls would be set up. Ten such tea-stalls were employed by Kiyonaga as motifs for a series of woodblock prints. That reproduced here depicts a tea-stall  on the road to the Tomigaoka Hachimangu shrine, which was dedicated to the war-god Hachiman.

Stools and benches have been placed outside, on which, beneath a cherry tree in blossom,  the waitresses are sitting. With the broad aprons which were the mark of their trade and with their hair piled up into an elaborate bow, they present a typical picture of the everyday life of the time. The stone lantern on the right is, as the inscription on the board next to it reveals, a gift from the collection of the Nakamachi tea-house, a famous pleasure house in Fukuyama.  The road to the shrine would have been lined with such lanterns.

Behind it can be seen a kettle with a novel handle designed in the shape of a spiral.

Sitting in front of the tea-stall is a woman in a short-sleeved kimono bearing a family emblem.  She is looking in the direction of the two younger women. It may be that these two, in the cheerful costume of the geisha world, have come from Fukuyama with other geishas to pay their respects to Hachiman

It may also be that they have been summoned to the two famous tea houses in the  neighbourhood of the shrine. Whatever the case, they represent for the artist the central motif of the picture.