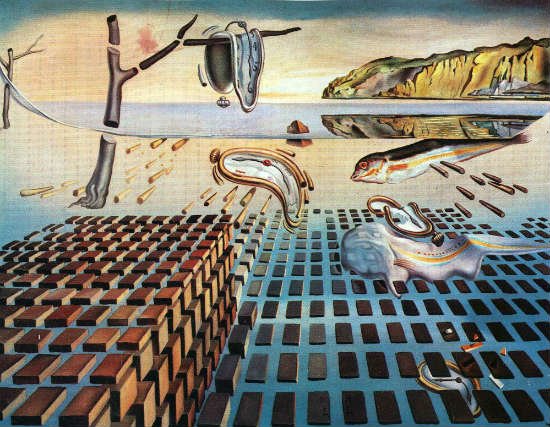 Do you know what time is?  Stephen Hawking wrote a whole book about its history.  But that is only the start.  Perhaps the confusion lies in the fact there are many sorts of time.  For a start there is ‘conventional time’ and there is ‘spiritual time’ and I think it is worth exploring these two aspects with respect to perceptions.

Time as we measure it in the physical world is measured using the planets, the sun and the moon.  We measure time relative to the movements of these bodies.  This is thus 'physical' time [if we can call it that] a useful means of providing a common point of reference for humans.   We assume they are fixed in terms of their relative motions to us – which in itself has its problems as Einstein pointed out. 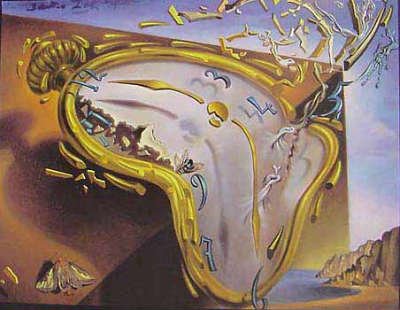 But this rather crude mechanism enables us to stamp any event with a number we might all recognise as having some meaning and it is a means for us to co-ordinate our actions.  When we say we would like to meet our friends for coffee at 10.00 and we all have synchronised physical time measuring devices then we are able to do it.

We make a lot of assumptions about the relative motions of the bodies we use for time measurement, but given the overall stability they have showed in the period in which we have been measuring they have ended up being quite a useful point of reference.

Even conventionally measured time can use different systems.

We may think that when we specify a certain date and a time as measured using our watches that this must be ‘time’.  But even using the planets and the sun and the moon, there are different systems in operation.

Jeff Mayo -  Astrology
The next unit of time is the week, which with its 7 days comes to us from ancient Babylonia, even the names of the days can be traced back to the planetary gods.  The length of the week corresponds roughly to one of the four phases of the Sun Moon cycle or lunation.

Jeff Mayo  - Astrology
The fourth basic unit of time is the day.  This is the period of the Earth’s rotation on its axis.  It may be measured with respect to the stars (sidereal day), the true Sun (apparent Solar day) or the mean Sun (mean Solar day).

So our measuring of time is relative only to other things, if those things changed our time measurement would be affected, we might appear to be living longer or not so long...

The Spiritual world is ‘timeless’

In contrast, the spiritual world is to all intense and purposes ‘free of time’.  The reason it is free of time is it is beyond perceptions.  It is only our perceptions that provide us with a sense of what time is. The flicker rate of our eyes produces a sort of log that our software of the mind uses.  If we go beyond our perceptions then we have no time reference.

In other words the log is just a log. The past and the present are just entries in the log and are all as accessible to us if we are completely spiritually open as any other moment in time.

So why do we persist in thinking time exists?  What makes us think that there is such a thing as time?  It is because of the log.  We look back through the log so we have a concept of the past from our perspective and we look forward by creating simulations of what might happen creating a log of possibilities.

The future is what we simulate to happen by executions of the programs of the universe that exist now.  But of course if those programs change, the future will look totally different.  The future in reality does not exist.  It is a simulation of the mind.

We look back and conceive of the past as the events in the log.  The past only exists because the log exists.  Wipe out the logs and you have wiped out history.  For people with brain damage, unable to access the log and their memory, only the present exists.

We take snapshots of events at a specific rate.  Under normal circumstances, they tend to get replayed back to us when we search our perception log at that same rate.  Our perception of the passage of time is dependent on this replay speed.

But a dog or a mouse has what is called a different 'flicker rate', it captures events at different speeds to ours.  For a dog his lifetime may seem the same as our lifetime relatively speaking.  He might feel he has packed in a huge amount in his brief life, because his flicker rate is so much faster.  And a little gerbil, whose life is in our terms so short, may have a flicker rate 10 times fast than ours, so again he feels he has packed vast quantities of experience into his brief life. 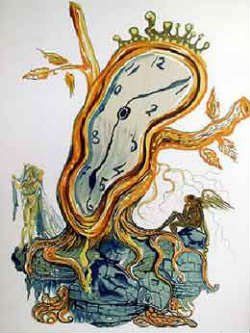 And what of an oak tree?  We do not know how trees record perceptions but let us assume they do.  They may only record snapshots at less frequent intervals relative to us.

In the first place, it is more than possible that all the things would start to appear as though they behaved like us.  Remember the wonderful 'Life of Plants' David Attenborough films?  When speeded up a plant appears to be more like us, it lives its life at a similar pace.  The little gerbil too, may appear to be less frantic and manic with a more leisurely life style.  Our little dog may appear even more laid back than we thought.  In the end we might get the impression that the dog, the oak, the mouse and we all have exactly the same life span, because relatively speaking the images would appear to coincide ‘in time’.

But this of course is false.  Their time is different from our time.  Logs are 'out of time'.  So all time is relative.