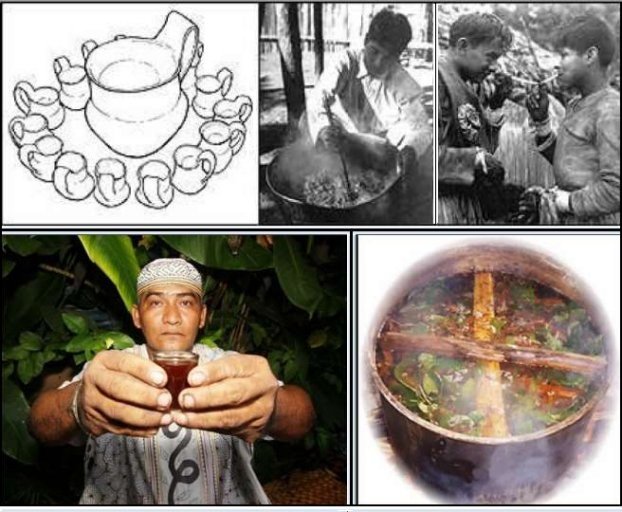 The principal hallucinogenic drug is prepared from Banisteriopsis caapi, a vine commonly called yaje (Lengua Geral) or gahpi (Desana). Short pieces of the stem are pounded in a wooden mortar, and cold water is then added. After straining, it is taken in small doses on the occasion of ceremonial gatherings. Several times a year, the kumu [priest] or the paye [shaman], assisted by several other men, prepare the infusion and invite others to participate in the ceremony.

The liquid is kept in a special pottery vessel (gahpi soro) that has a sacred character. The vessel is manufactured by an old woman who, before firing it, polishes the surface with a very hard smooth stone of a yellowish colour, called uarari-ye.

The vessel is globular, with a short cylindrical base and low neck. Like other ceremonial objects, this vessel also consists of three parts: the "yellow" base, the "red" body, and the "blue" upper part through which communication is established with the super-natural world when the liquid is served.

The body of the vessel is painted in red, white, and yellow, repeating the designs that adorned the mythical Snake-Canoe. As a matter of fact, the vessel is identified with the Snake-Canoe, especially with its prow,

"… the part that leads, that carries, that explores. As mankind arrived in this world in the Snake-Canoe, so will it now undertake the journey of the return. The point of pamuri-gahsiru explored, and now it is the yaje that explores," says the informant.

The participants are exclusively men of some thirty years or older, and they sit in the center of the maloca. A man fills a small cup (gahpi koa) with the drink and, carrying it toward the others, says rapidly: ma-ma-ma-ma-ma! (Take!). While they are drinking, they must smoke tobacco because this is said to help to produce the desired hallucinations.

In the rear part of the maloca are the women who, although they are not allowed to drink yaje, play an important part in the ceremony. The men drink in silence until, after a while, the first effects are produced by the drug. Now the kumu fulfills his principal role.

In a loud voice, the kumu says: "I am the central person (deyage; doari mahse/the "person seated"),  am the only who is left. Therefore I am going to teach you."

Then, step by step, the kumu explains and interprets the development of the hallucinations and the diverse visual and acoustical sensations that accompany them. Speaking in a hypnotic tone, with great precision and insistence, he explains what the men see and feel.

The hallucination has several phases, and during the first the person feels and hears a violent current of air, as if a strong wind were pulling him along; the kumu explains that it is the ascent to the Milky Way; in order to arrive at their final destination, they must leave this world and first find the current of communication with the winds. Now, following the Milky Way, the men descend to Ahpikondia.

They now feel enclosed by floating sheets that move and flutter, as if they were in a room whose walls consist of cloth; yellow lights appear that become stronger and stronger, until they give the impression of a mass of luminous bodies in movement.

The second phase is the arrival at Ahpikondia. Now shapes and figures of different colours appear that move and change in size, and the kumu explains that these shapes are pamuri-gahsiru, vai-mahse in the "houses of the hills".

Emekoru-mahse, Diroa-mahse, and the Daughter of the Sun. The sound of the stick-rattle that the kumu shakes becomes the voice of the Sun.

Viho-mahse appears, together with the "ancient eagles," the Daughter of Aracu, and beyond the blue sphere the men can see the yellow light of the Sun. At the same time they hear the buzz of the hummingbird; they see it suck honey; they see the squirrel, the cock-of-the-rock, all the animals and beings of myth and nature.

During the first phase the men talk and ask the kumu about their visions, and he interrogates each one about what he is experiencing, always explaining, pointing out details, and interpreting them.

Some men, usually the younger ones, still do not have well-defined hallucinations but only see lights and feel nauseated; in that case they withdraw, followed by the deprecating laughter of the women whose function consists in animating the men. The women sing: "Drink, drink! This is why we were born. Drink, drink! Because this is our task. By drinking they will know all of the traditions of their fathers. By drinking, they will be brave. We will help them!"

After about half an hour the effect passes. Music can still be heard in the distance, but the forms, colours, and movements have disappeared. The men gather together and continue drinking chicha.

Taking yaje is called gahpi iri-inyari (from iri/to drink, inyari/to see), and is interpreted as a return to the cosmic uterus, to the "mine," to the source of all things. It has the objective of reaffirming religious faith, through the personal experience of seeing with one's own eyes the origin of the Universe and of mankind, together with all the supernatural beings.

On awakening from the trance, the individual remains convinced of the truth of the religious teachings. He has seen everything; he has seen Vai-mahse and the Daughter of the Sun, he has heard her voice; he has seen the Snake-Canoe float through the rivers, and he has seen the first men spring from it. The voice of the kumu has guided him and has explained everything to him in detail.

During the ceremony of yaje, the presence of a kumu, or another person of wide esoteric knowledge, is certainly of the highest importance. Speaking or singing continually, explaining each phase of the hallucinations, which he has experienced on many previous occasions, the kumu imprints his interpretation of the sensations in such a manner that a new hallucinatory experience is readily founded on a pre-established basis. The power of conviction of these hallucinations must be truly extraordinary in these circumstances.

Of course, two factors are combined here: trance, or the separation of the "soul" and its mystical union with the divinity, and, simultaneously, an acceleration of time.

"To take yaje is to die," the informant says, and is considered the anticipation of death.

The person not only passes from one cosmic plane to another but enters a fourth dimension, the temporal one, the one that permits the establishment of divine contact. This acceleration of time is consciously produced and does not occur exclusively with the drinking of yaje.